UPDATE 10pm Tuesday December 9, 2014:  Sam’s body was found a couple hours ago. The Guardian reported that police divers discovered the body in a swamp in Warradale Park, less than a kilometre from his home, about 10am local time on Wednesday.

ORIGINAL POST: At just two-and-a-half, Sam Trott should be home with his mother and father. He’s not. In fact, he hasn’t been since about 10:30 Tuesday morning; ever since, his parents and police have been searching frantically to find him. 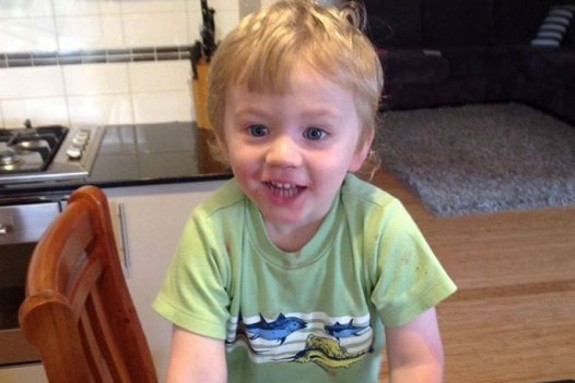 According to his mother, Lyndal Trott, little Sam isn’t able to open doors on his own, but when they are left open, he’s an “opportunist.”

“Sam is a runner . . . he is active and he will run,” Lyndal told ABC. “We’re always chasing after him. He’s an opportunist, and if the door is open, he will run through it.”

She believes that the door may have been left open by tradesmen that had been at the house that day. She also says that she had spoken to her son just a minute before noticing that he was missing.

“I could see the front door wide open . . . and I just ran. I ran out the front,” she said. “Literally thirty seconds and he was not there anymore.”

Police started their search near the home, using traffic officers, mounted police, police dogs, and even the police air wing to find the little boy. Divers have also been scouring the local waterways for him. Between all the manpower searching and what very little bit of time he had been gone before she noticed he was missing, Lyndal said she truly believed her son would be found quickly.

“Obviously I was really concerned in the first few minutes, but I really did expect to get a phone call—because I did call the police straight away—to get a phone call in 10 minutes to say someone’s got him because he’s a tiny little boy.”

But now Sam has been missing overnight and police have started asking local residents and business owners to check every nook and cranny for little Sam. Even more than that, they are explaining to people that they may find Sam in some of the strangest places, and that, because he has autism, he may not even respond to his name.

“He’s autistic so he may not play with normal toys. He could be hiding in the garden, putting things in a drain, or something like that,” Sam’s father, Matthew, told ABC.

Sam’s grandfather, Geoff Trott, added that “he doesn’t talk very much, so he may not respond to his name being called, which makes him all the more difficult to find.”

But finding him is important, and the family is holding out hope that it will happen very soon.