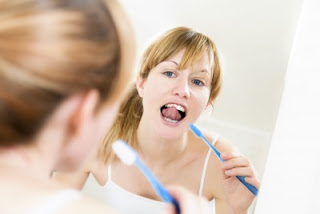 Now that I am into my 22nd week of pregnancy I have noticed that my gums start to bleed easily when I floss.

I know that is must be connected to my pregnancy because I am a big ‘flosser’ and do so twice a day normally with no issues.

Apparently, pregnancy brings on a flood of hormone level changes (really? ha!) and this may cause your gums to bleed or become sensitive.

Higher than normal progesterone levels and your gums reacting more than they would usually would to the bacteria found in plaque can also increase your blood volume during your pregnancy. This means that you may experience bleeding gums when you brush or floss.

Bleeding or sensitive gums affects more than half of the pregnant women around the world.

Pregnant women can be more prone to gingivitis if they do not care for their teeth and gums correctly. This itself can then develop into periodontitis – which is a serious form of gum disease in which the infection goes beyond your gums into the bone and other tissue that support your teeth.

Studies have shown that women who suffer from either sever gingivitis or periodontitis are certainly more prone to preeclampsia and even to premature labor.

How can you prevent this?