Isn’t he sweet? New mom Shakira took to her twitter account on Monday to show off her two boys! 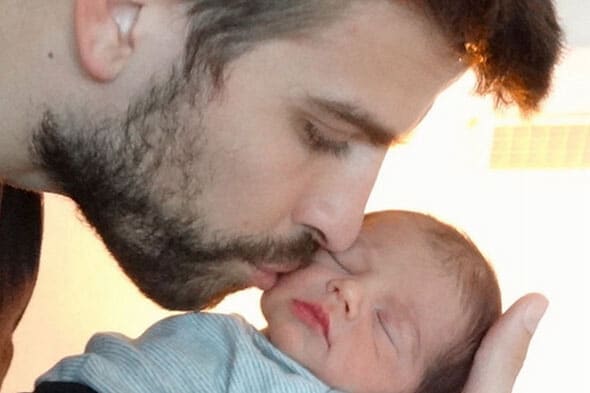 Capturing a beautiful moment, the singer’s partner Gerard was photographed cradling their tiny baby in his hand while kissing his face.

Along with the image Shakira also shared a link to Unicef’s website so fans could donate to a worthy cause.  A UNICEF Goodwill Ambassador since October 2003, Shakira recently held an online baby shower to benefit the non-profit organization, who provides resources to developing countries.  The link directed the singer’s fans to a page on Unicef’s site where they could donate polio vaccines, mosquito nets or baby scales for a nominal fee.

Shakira announced her little man’s arrival on her site on January 22nd saying,

We are happy to announce the birth of Milan Piqué Mebarak, son of Shakira Mebarak and Gerard Piqué, born January 22nd at 9:36pm, in Barcelona, Spain.

The name Milan (pronounced MEE-lahn), means dear, loving and gracious in Slavic; in Ancient Roman, eager and laborious; and in Sanskrit, unification.