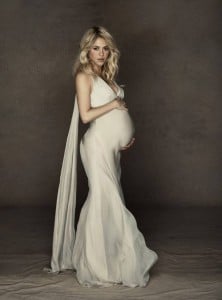 Shakira is a mom! The singer announced the arrival of her first child, a boy on her website on Tuesday saying,

We are happy to announce the birth of Milan Piqué Mebarak, son of Shakira Mebarak and Gerard Piqué, born January 22nd at 9:36pm, in Barcelona, Spain.

The name Milan (pronounced MEE-lahn), means dear, loving and gracious in Slavic; in Ancient Roman, eager and laborious; and in Sanskrit, unification.

Just like his father, baby Milan became a member of FC Barcelona at birth.

The hospital confirmed that the couple’s first child weighed approximately 6lbs. 6 ounces, and that both mother and child are in excellent health.

Milan is the first child for the singer and her boyfriend Gerard Pique. The pair celebrated his pending arrival last week with an online baby shower hosted by the United Nations Children’s Fund (UNICEF) to help raise awareness on the world’s most vulnerable infants.

The invitation to the baby shower by the Colombian singer and Pique read,

“To celebrate the arrival of our first child, we hope that, in his name, other less privileged children in the world can have their basic needs covered through gifts and donations.”

“Thank you for sharing this unforgettable moment with us.”

She likely has everything she needs for her little guy so it was nice of her to use her star power to help others.