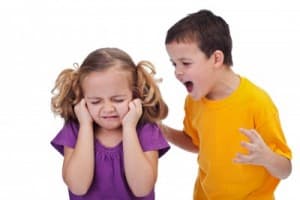 Think sibling rivalry is harmless? Guess again! A new study says that sibling bullying is just as harmful as school yard bullying. Though it’s common for siblings to have conflict, the study, Pediatrics published study says that when that conflict escalates to physical or psychological aggression, parents need to intervene. And with siblings are spending a lot of time together this summer, parents may want to address the issue sooner than later.

“If siblings hit each other, there’s a much different reaction than if that happened between peers,” Corinna Jenkins Tucker, an associate professor of family studies at University of New Hampshire and lead author on the study told CTV News. “It’s often dismissed, seen as something that’s normal or harmless. Some parents even think it’s beneficial, as good training for dealing with conflict and aggression in other relationships.”

But the study, which analyzed more than 3,500 children under the age of 17 with at least one sibling, found otherwise. The long-term study, called the National Survey of Children’s Exposure to Violence asked the children over the phone about bullying in the past year. The kids were questioned over physical aggression, psychological aggression (such as being scared by a sibling, or being told that they weren’t wanted around), and property aggression (stealing and breaking of personal things on purpose).

A total of 32 percent of the children surveyed reported experiencing at least one form of aggression form their sibling. These children, all victims of sibling aggression, were said to report more symptoms of depression, anger and anxiety than their same-aged peers who have not been victimized by their siblings. Additionally, all of the children reported emotional distress from the bullying they’ve experienced, and children under the age of 10 reported the most distress when it came to being the victim of physical aggression.

Parenting expert Alyson Schafer told CTV News that there’s nothing new or alarming about sibling rivalry; siblings seem to be hard-wired to compete for parental attention and living in the same space as another human being almost always creates conflict. However, the way that we, as parents, respond to the conflict, can determine whether or not true rivalry becomes an issue, and if the level of conflict and aggression increases over time.

“What I look for in terms of assessing dysfunction is to ask: Do they ever get along? Do they always fight?” She told CTV’s Canada AM Monday. “If you leave them alone and someone else is looking after them, are they still going at it the whole time you’re away? Because so much of what happens in sibling conflict is they’re trying to engage their parents. So if their parents aren’t there to referee and take sides, they tend to get along.”

She also says that, when analyzing just how severe the rivalry situation is, parents should look for those moments of unprompted, unsolicited gestures of affection and goodwill.

“Those little acts of caring show you that, behind the conflict, they still have a genuine love for one another,” she said.

And if that’s the case, Schafer says that parents should never ask “who” started the fight or take sides, because that will just add to the competitiveness between siblings. Instead, parents can take action that will absolve the conflict without favoring either child.

But when that arguing moves to a more aggressive level, or when it seems that there really is a serious rivalry issue (i.e. they’re arguing, even when parents aren’t present, or there are very few acts of kindness), parents may want to employ the help of a family therapist.

“These are the things we’re trained in, to help families change those dynamics,” Schafer said. “There’s a lot that can be learned in a few counseling sessions.”