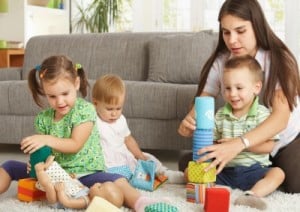 For single moms, there’s nowhere else to place the exhausting responsibilities associated with raising a child. All of the bills, all of the housework, all of the outside work, all of the child’s care rests in one person. That, in and of itself, can be extremely stressful. Add in the fact that few single parents have a reliable support system, and you have the makings of a nervous breakdown (trust me, I’ve been there).

To further compound the issue, recent studies have indicated that there are more single moms today than there used to be. According to U.S. Census figures, 10 million single mothers lived with children under the age of 18 in 2010. That’s up from just 3.4 million in 1970. Those same figures found that approximately 39 percent of all live births in 2010 were to single, separated or divorced women. These figures mean that now, more than ever, it’s important for single moms to learn how to manage their stress.

Stress can cause a number of health complications, including depression, heart complications, high blood pressure and more. Stress can also drive wedges in between parent and child. If there’s only one parent, who does the child have?

Researchers at Kansas State University tried to shed a little light on helping single mothers with their stress. They used national data related to single mothers and surveyed another 2,370 single mothers on parental stress levels, engagement and child temperament at ages one, three and five.

“The most important thing we found was the best way to reduce parenting stress when parents feel overwhelmed was to spend more time with their children,” said Blake Berryhill, one of the researchers who conducted the study. “Being a single mother and being a parent, in general, is very exhausting, but if a mother is willing to spend time with her children, it can reduce her parental stress because she will feel that in her role as a mom, she is doing an adequate job.”

It may sound counterproductive for single mothers to spend time with their children when their children are what’s stressing them out, but I can honestly stand behind this based on my own personal experiences. I was a single mom for nearly four years. I felt the least stressed when I actually spent time playing with my children. It’s definitely hard to squeeze that time in when you’re exhausted and there’s still more work to be done, but it is so wonderfully worth it!