Home » Sisters give Birth on the Same Day

Being pregnant at the same time, sisters Rachel and Sarah knew their babies were going to have many similarities growing up. But the moms-to-be never realized that the bond between their newborns was going to be so strong that they would even end up celebrating their birthdays on the same day! 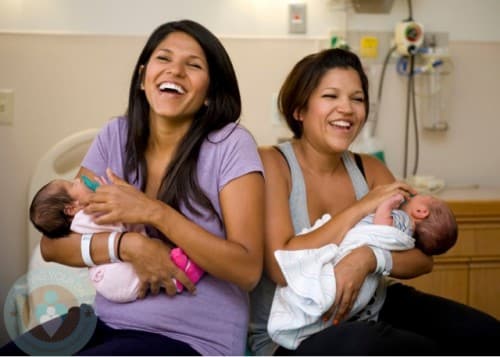 Sarah Mattson 25, was expecting her first baby in a couple of weeks and felt ready for the experience having just witnessed her older sister 26 year old Rachel McDaniel give birth to a healthy baby boy.

As Sarah visited with baby Grayson, her new nephew born at the Saddleback Memorial Medical Center earlier that day, she told her sister,

Even as she said it, she felt contractions, while having lunch with her parents around the corner from the hospital. Sarah would have ignored the warning but her mother Rebekah Fernando knew these were no ordinary cramps and felt sure she was also going into labor.

“They’ve always done everything together,” says their father, Enoch, 56.

Growing up in Mission Viejo, Sarah and Rachel were practically inseparable. When Rachel went on a pony ride, Sarah wanted to go next. Be it attending Sunday school or swimming during a family vacation at Palm Springs, the sisters shared much in their lives. It was only when the family moved to San Clemente that the two went to separate schools.

But the sibling bonding continued as adults. They got engaged six months apart from each other and got married within 11 months of each other. They even live 2 miles away for each other at Dana point.

After celebrating their third anniversary last August, Rachel and her husband 30 year old Andy began planning for a baby. In November Rachel announced that she was pregnant to everyone. Her baby was due July 16.

Sarah was glad to know she would be an aunt soon. But within two weeks she realized that she was pregnant too. Her baby was due to arrive on July 30th.

“I was in total shock,” Rachel says when she first heard that Sarah was expecting too. She thought what she has often thought over the years, ‘OK, we’re going to share this experience.’

After birth when an exhausted Rachel asked her parents to get some food she noticed her sister was not around.

When their mother told her Sarah was getting contractions and getting herself examined Rachel knew that very instant that the day was going to be doubly special for the family.

Sarah’s contractions were four minutes apart by that time and were becoming more frequent.

Says J.P. Sarah’s husband, “Here I was, anxious to meet my new nephew, and my wife tells me she’s in labor.”

Shortly after midnight Rachel received the news from a nurse that her sister had just delivered.

“Your sister just delivered. She’s going to be in the room next door to you.”

Sarah’s daughter Sage Marie, was born at 11:47 p.m. on Monday. With just 13 minutes to spare the two cousins arrived on the same day into the world.

Nurses at the Laguna Hills’ hospital can’t recall a similar incident that has occurred in the past.

The babies met each other for the first time on Wednesday when much to their family’s delight they seemed to clasp each other’s hand.

Her husband, Enoch, jokes, “For the rest of (Grayson’s) life, he’s going to be saying he’s 11 hours older than her.”

“They’re birthday buddies now,” Rachel says. “This makes it that much more special.”