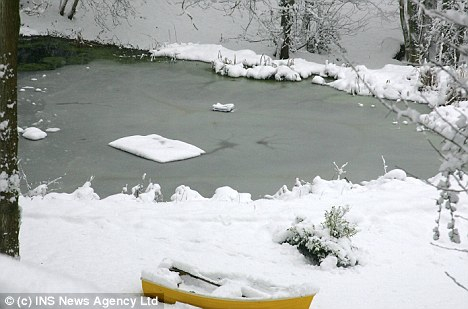 A six-year-old British boy is fighting for his life after he plunged into a frozen pond and spent half an hour trapped under the surface. Hospital officials reported that Thomas Hudson was blue but still alive when he was pulled from the icy waters in Crookham Common, Berkshire, yesterday afternoon.

A woman believed to be his mom dove into the water try to rescue him after his friend raised the alarm.

When firefighters arrived she was still in the water trying to find the little boy.

After he was discovered, medics worked to restart his heart and breathing before he was airlifted to the hospital for treatment.

Thomas was thought to have walked out onto the ice as he was found not far from the center of the pond, which measured 60 feet a round.

Firefighters searched for him in icy waters for between 20 and 30 minutes before he was found.

“We worked as a team with the fire service to locate the boy in the water and he was pulled out,” Paramedic Hugh Whitaker said. “He was in cardiac arrest at the scene.

A South Central Ambulance Service spokeswoman said the boy’s young age, and the water’s bitter temperature, could have helped his chances of recovery.

“In our experience, where children have been pulled out of water, as long as the water was icy, they can be revived from a state of respiratory arrest,” she said.

“It could be because their metabolism slows down much faster than ours. But it’s all touch and go. We are all hoping he makes it through.”

My thoughts are with this family. As of last night he was still in critical condition. The good news is that there are a number of documented cases of children surviving after being immersed in icy waters for twenty minutes or more. Let’s hope that this family will be able to add their son’s name to this list.