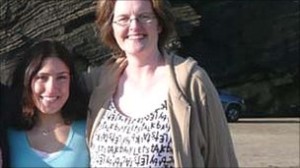 Liz Stringer 47 has helped make the dreams of childless couples come true for the last thirteen years of her life. She is a surrogate mother and has given birth to five children and is currently pregnant with her sixth surrogate child. She has been quoted saying that being a surrogate mother was “slightly addictive”; bringing happiness to families that otherwise could not have children on their own.

Liz is a chef at a local nursing home in Portmadog, runs her own children organic clothing company, and is a co-founder of Surrogates UK, which is where to-be-parents Sharmy and John Beaumont found her. The busy mom is currently carrying the Beaumont’s second child, the first child Liz gave birth to fifteen months prior.

During her pregnancy with the first Beaumont child Liz said, “The midwives were amazing and really included Sharmy and John at every step of the way and treated them with such compassion at the birth”.

The Beaumont’s second child is due in October and will be delivered at Liz’s home.

“This time will definitely be the last although I said that three years ago”.

Liz has two daughters of her own sixteen and nineteen and is divorced which has made the transfer of becoming a surrogate mother easier on her.

She recalls carrying a child for a woman who tried to conceive a child eleven times and lost all eleven to miscarriages.

“One woman had 11 miscarriages. It’s just so wonderful to help other people. It’ just a fantastic feeling when you see them with their baby”.

All of Liz’s surrogate pregnancies have implanted through IVF (in vitro fertilization) treatments performed at a clinic in Manchester. She has been extremely lucky and has not had any complications with her pregnancies to this point.

Carrying a baby eight times can have a physical and emotional toll, Liz says,


“Physically, having my eight pregnancies, you have to be quite fit to be able to do it. Emotionally, the first one, you didn’t know how you were going to react. You can get your emotions mixed up and you’ve got to be a little bit careful. Surrogacy is complicated but Surrogacy UK advises surrogates to get to know your couple six or even seven months before it’s quite an emotional journey. You should establish your friendship before you start”.

And while she is connected to all of the babies she has delivered she would not want to parent all the children she has carried.

“It is the most amazing feeling of doing something great for somebody, it’s just wonderful,” she said.

“Some people say: ‘How can you give them away?’

“But I’m not giving them away, I give them to their parents.”