According to a recent study, American children are now spending as much time consuming media as most adults spend working. This could mean big trouble for our youth, especially when it comes to sleep, the authors say. 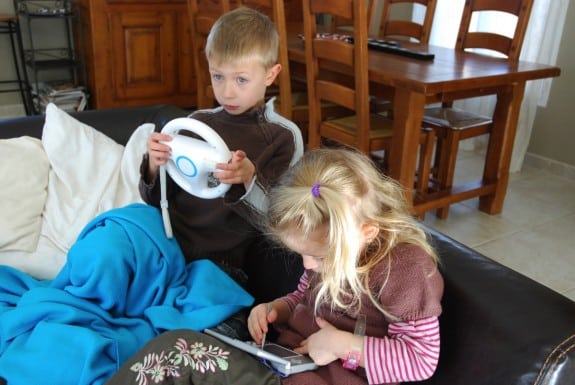 Previous studies have looked at how the presence of a television can impact sleep and delay bedtimes, making for more tired children who are at higher risk for chronic health conditions such as obesity, diabetes, coronary heart disease, hypertension, and stroke. Not enough sleep can also hinder school performance and psychosocial health for young children.

But in todays world, television sets aren’t the only threats to sleep. In fact, the advancement of technology has made media consumption easier than ever, and many children own personal devices that they can use to text, read, play games and browse the internet.

Published in the journal Pediatrics, the study looked at a total of 2,048 participants from the Massachusetts Childhood Obesity Research Demonstration Study. All of the children were fourth- and seventh-graders attending public schools in two Massachusetts cities. Data analysis was done by examining questionnaires in which the children were asked what time they usually went to bed and woke up in the past week, and how many days in that same time frame they felt as if they needed more sleep.

“[We] sought to examine association of small screens and TVs in children’s sleep environments and reported screen time with children’s sleep duration, perceived insufficient rest or sleep, and usual bedtimes and wake times,” the authors said.

The children were also asked if they slept with a television in their room and/or with “devices to play games or send text messages or chats to their friends like cell phones, smartphones, and the iPod Touch” nearby. In total, the vast majority reported sleeping near devices with small screens (54%) and in a room with a television (75%), and seventh graders were much more likely to sleep near a small screen than fourth-graders (65% versus 46%).

After analyzing the data, researchers found that children who sleep with a small screen nearby (such as an iPhone, iPad, Android tablet, etc.) are more likely to experience shorter sleep duration, and they reported feeling as if they didn’t get enough sleep. Audible notifications that indicate new messages or emails are thought to be partially responsible, but the most likely reason has to do with melatonin production.

Light emitted from televisions and small screens decrease melatonin production and thereby disrupts the child’s natural circadian rhythm. Researchers believe that this very same effect is amplified with smaller devices because, unlike televisions, which are viewed at a distance, smaller devices are held close to the face, offering very little buffer between the light and the child’s eyes.

In fact, while sleep was affected by everything from watching television, DVDs or playing video games, children with small screens was associated with an increased prevalence of self-reported insufficient sleep. The results–which showed children with small screens received 20.6 minutes less sleep than those that had never slept with a small screen, and a bedtime delay of 37 minutes, on average–proved that the small-screen effect was independent of televisions in the bedroom. And, with each day the child slept with a small screen nearby, the effect increased.

“Children who slept near a small screen, and those with more screen time, were more likely to have perceived insufficient rest of sleep in the past week,” the researchers said. “Although longitudinal and experimental studies are needed to confirm these associations, our findings caution against children’s unfettered access to screen-based media in their rooms.”