Home » Smallest Baby To Be Born in Ontario Released Home!

A tiny Niagara Falls baby has shown just how far neonatal medicine has come, by beating the odds to become one of the smallest babies to ever survive in Ontario.

When Evelyn Blythin was born she weighed a mere 2lbs 12 ozs.  To her parents, Ginger and Neil she was tiny, but not as itty-bitty has her twin sister Rachel.  The identical twins were diagnosed with twin-to-twin transfusion syndrome(TTTS).   Early enough in the pregnancy doctors were able to detect the condition and performed a laser surgery to separate their placenta. But a late May ultrasound showed both babies were now having trouble getting the fluids they needed to develop properly.

On June 3,  Ginger gave birth to the girls via emergency C-section.  When they arrived at 28 weeks gestation, doctors at Hamilton’s Mc Master Hospital expected the babies to be about 500 grams each.  Instead Evelyn was 1,260 grams and Rachel was just a mere 330 grams.  She wasn’t getting the blood she needed to grow and what blood she did get, she ended up passing off to her sister.  This resulted in her being diagnosed with intrauterine growth restriction, a condition that stems from not getting enough nutrition. 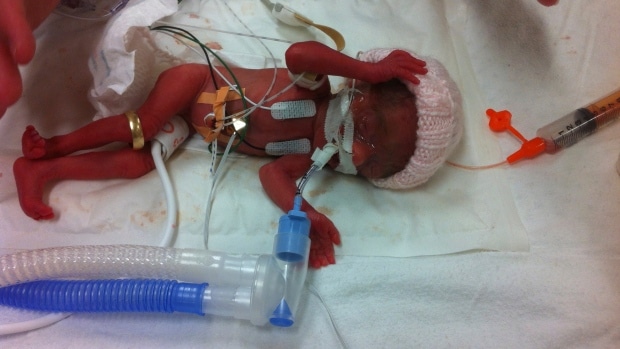 Image via the Blythin family

Their journey has been a bumpy one.  Often, the couple didn’t know how much time they would have with their girls.  But over time the girls got bigger and stronger.  Evelyn was released home in August and Rachel, who is now a healthy six pounds twelve ounces, joined her sister this week.

“We never expected to come this far,” Ginger told CBC News, adding her other children, a five-year-old son and three-year-old daughter, are particularly thrilled to have both their baby sisters home.