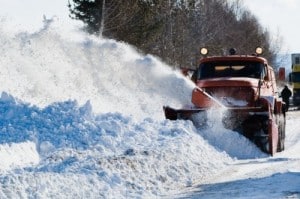 Snow Plow Driver Manuel Canales was in the middle of a blizzard in Baraboo, Wisconsin on Feb. 2 when he heard over his scanner that a baby had stopped breathing in North Freedom.

The dispatcher’s message said that an ambulance was required at the scene along with a county plow that could clear the way during the blizzard. Knowing that the plow that covered that stretch was not in a position to reach there in time, he decided head over and help.

“I knew they didn’t have any time, so I just took off,” Canales said. “I called and told my supervisor I was just going start heading over there.”

In North Freedom Amber Jasper was struggling with her four month old baby Jeremiah. He had already had a tough night as due to a stuffed nose he was waking continuously. Amber cleared his nose each time but the last time he woke, Jeremiah could not breathe at all.

“He just looked up at me and took a breath, and then he stiffened up,” Jasper said.

Manuel had reached North Freedom and began plowing to clear the way for the first responders. Ida Feine, an EMT with the Baraboo District Ambulance Service was heading towards the home in an ambulance but what normally was a 6 minutes drive took 18 minutes to cover.

“If he hadn’t plowed that out for us it would have been almost impossible,” Feine said.

Thankfully the medic crew arrived in time to give oxygen to the gasping baby.

Meanwhile, Manuel saw that snow was again starting to cover the first path he had cleared for the crew, so he turned back again towards Baraboo to clear the same lane.

“We pretty much drove on the wrong side of the road all the way back,” Feine said. 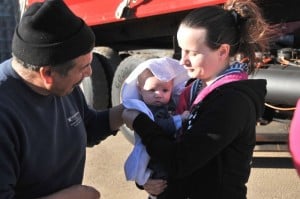 Finally doctors at the St. Clare Hospital in Baraboo diagnosed an upper respiratory infection and sent the infant to another area Medical Center for further treatment.

With the ordeal over, Amber thanked all the first responders for being there in time to save her baby.

“I thank them very much,” she said. “If it wasn’t for them I don’t know what would have happened.”

But Manuel says he would not hesitate to do the same thing again.

“I’ve got my own kids going up and down the road, so I try to make it as safe as I can for the rest of them,” he said.