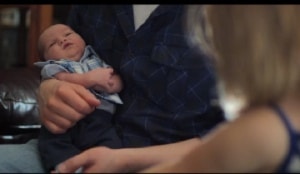 Tim and Jamie Goldsmith carefully devised their labor and delivery plans, just in case Jaime went into labor before Tim made it home on leave from Germany. Scheduled to deploy to Afghanistan next month, Tim wasn’t expected to be home for a few more days, but Jamie wasn’t expected to deliver for a couple more weeks. So it seemed that everything would work out perfectly. That was, until, little Noah made his own plans.

Able to get a head start leave before his next deployment, Tim came home, jetlagged from the long trip back to the states. At about 3 a.m., Jamie woke up with contractions. While she wasn’t really new to the labor game (the couple does have a two-year-old daughter named Aly), she wasn’t completely sure that they were real contractions.

“I wasn’t sure it was the real thing, but it was starting to feel that way,” Jaime said.

So she finally prodded the exhausted Tim awake to tell him it was time. For the next few minutes, it seemed as if their labor plan would go off without a hitch. Tim had already taken Aly downstairs for grandma to watch. Grandpa was already awake and ready to drive. The bags were already in the car. They had even called Jamie’s mother – the family member who would drive Jaime the rest of the way to the hospital. But as they headed down the stairs for their final descent, Jamie’s water broke.

Tim managed to get Jamie down to the very small downstairs bathroom where she sat on the stool. Time then called 9-1-1.

“What do you see?” asked the dispatcher.

After getting Jamie on the floor and checking, he answered, “Well, I see the head.” 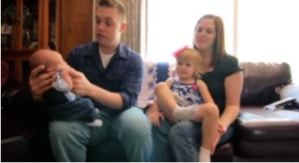 At that point, there was no turning back. With Grandma watching from the doorway of the bathroom and fetching towels, asking, “Is the baby really going to come right now?” and Jamie’s head hanging out into the other room, little Noah came into the world with only two pushes. Tim hadn’t even had a chance to grab her some pillows to prop her head on before the 7 pound, 15 ounce baby boy landed in his daddy’s hands.

After he was out, the dispatcher gave Tim instructions for tying off the umbilical cord. He ended up using his shoelace. And five minutes later, the ambulance arrived (flagged down at the end of the road by none other than grandpa), and Jamie, little Noah and hero dad Tim were rushed off to the nearest hospital.

“He did great,” Jamie said about her husband. “He never panicked, stayed cool, stayed calm. Just did what needed to be done.”

Even West Peculiar Fire Protection Chief Douglas Short commended Tim on his ability to stay calm during the experience.

“This was a wonderful, miraculous thing to happen,” said short. “My people like these kind of calls.”

Of course, in all the excitement, it seems that everyone forgot to call Jamie’s mother. She had still been waiting at home for grandpa, Tim and Jamie (in labor) to arrive when grandma called her back saying, “Well, Jamie had the baby on the floor.”

And now that all the excitement is over, Tim is spending every bit of his leave with his family before his deployment. He even spent three whole days in the hospital with Jamie and Noah – minus a shoe lace, that is.

We’re just glad that he was able to make it home for the crazy but miraculous event. Best of wishes to Tim, Jamie, Aly and the newest addition to the family, little Noah.