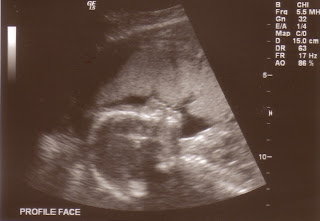 New ultrasound technology and the Internet have allowed Army Spc. Nicholas Weaver to see the baby he has on the way at home while he’s serving in Iraq.

The 20-year-old soldier got a sneak peek of his son in the womb in a sonogram streamed live from a Folsom imaging center. The sharp, 3-D image clearly revealed little Aiden Weaver’s wide eyes, pug nose and tiny fingers. A slight smile crossed his face beneath a full head of hair.

“He looks squished – but adorable,” Weaver said in a computer instant message to his wife, Megan. “He looks a little bit like both of us.”

The expectant mother, who is 32 weeks, she was excited to beam the images to her husband, who is not expected to be home in time for the birth in April.

The dad-to-be began a three-year enlistment last April. He is expected to return home in June, although his commanding officers are working to get him a leave in April to be present for his son’s birth.

Many 3D Ultrasound clinics offer families the opportunity to see their growing relatives over the internet. It is definitely a nice twist that this dad was able to log on from so far away.