When two back to back blizzards socked regions in West Virginia with three feet deep snow, two soldiers braved everything to rescue a stranded mother and her four week old premature baby from their home. 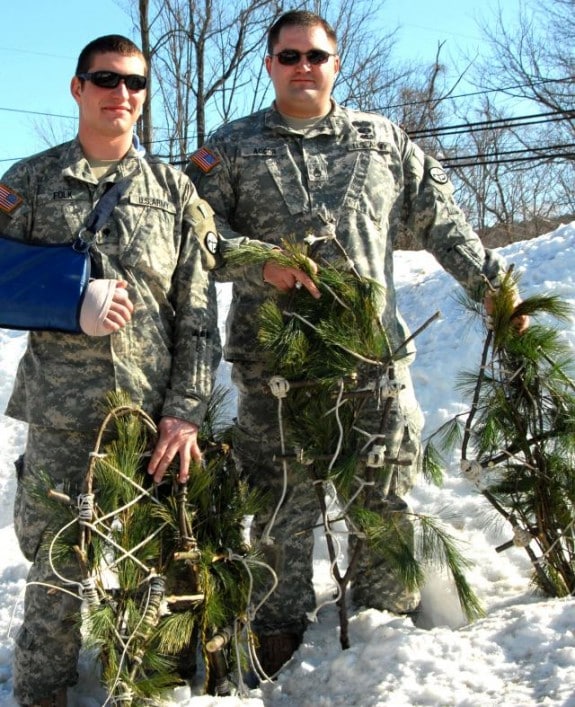 On the morning of 10 February, a concerned neighbor called officials of the 201st Field Artillery Battalion based in Fairmont, W.Va to help the mother and child who had been locked inside their home due to the blizzard and were living without power for two days.

When the soldiers reached the location, they found that the snow was 8 feet deep in some places and they had to hike up a ridge almost three miles to reach the home. It was then that they invented a workable solution to evade the snow by using pine tree branches and cloths line to make snowshoes.

Wearing the sturdy shoes, they reached the home and without wasting anytime, started planning for the walk back to the waiting Humyee. While the baby was wrapped with blankets and placed inside his rucksack with heated hand warmers by Sgt. Accor, the woman was placed on a 6 feet by 3 feet sled, known as an emergency medical extraction device which Spc. Folk pulled down the ridge like a sledge dog.

The two were so intent on the rescue mission that they did not even stop to ask the mother’s name or the baby’s gender. “We just wanted to get them out of there to safety,” said Accor.

What made the feat even more commendable was that all the while Folk was sporting three broken bones in his right hand which he had fractured earlier while rescuing another person.

The baby and the mother were soon safely brought down and taken to a relative’s home.

The snowshoes that both soldiers invented are still intact and are very likely to be used again to help more in distress as Accor said, “It’s our job, that’s what we are here for.” – Atula, Staff Writer