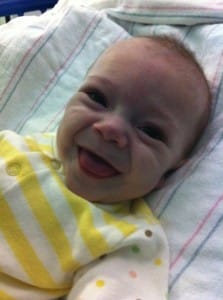 For middle school sweethearts, Gina and Matt Berrios, parenting is very different. They spend their days and nights hoping and praying for a miracle. They find strength in the little things. And as they watch their son, Maxwell, fight for his life, they are reminded that it’s those little things that make life worth living.

Gina, formerly a nanny and preschool teacher “absolutely loved” children, and she couldn’t wait to be a mom. She and Matt finally decided to start trying, but the road to parenthood wasn’t easy for the couple.

“After years of trying, we were given one obstacle after another”, Gina told The Durham News. “Matt lost his mother, Barbara, in November 2006 and his stepfather, Richard, in March 2007. With that, came incredible heartache.”

In 2007, the couple decided to move from Miami to Raleigh. They wanted to leave it all behind and get their lives back on track. But parenthood still eluded them. Finally, in 2010, they decided to start in vitro fertilization. Their first attempt was a success, but at eight weeks, Gina miscarried. Their second try was unsuccessful as well. But their third try resulted in a confirmed pregnancy: triplets.

“I was overjoyed, while Matt was freaking out,” Gina said. “This didn’t last long because at six weeks I lost one baby and at 10 weeks, we lost the second.”

The couple worried they would lose the third child, but at 18 weeks gestation, they learned they were expecting a boy – and that baby boy made it all the way to delivery.

Unfortunately, the couple’s troubles were far from over. Though the delivery had gone off without so much as a hitch, their son, Maxwell, ended up being transported to WakeMed of Raleeigh for his very first surgery by the next morning.

Within just hours of his birth, Max was diagnosed with a heart murmur, an atrial septal defect (ASD), pulmonary hypertension and hypospadias, a birth defect of the urethra. Max ended up spending his first Christmas at the UNC Hospital for a cardiac catheterization, a medical treatment to help treat his heart problems. A week later, he was sent home with oxygen and Sildenfil to help reduce his pulmonary hypertension. By January 2012, he’d had a second stent placed at UNC, and he had now received the diagnosis of pulmonary vein stenosis.

According to the website of Boston Children’s Hospital, pulmonary vein stenosis can result in a partial or total flow obstruction. Surgeries used to widen the veins or catheterization used to stretch the vessels is temporary, at best. Blockage generally reoccurs within six weeks. The condition is said to occur in just 1.7 children per 100,000 under the age of 2. The five-year survival rate is less than 50 percent.

The prognosis wasn’t good, but his parents refused to give up hope.

“One cardiologist at UNC told us to take Max home and make him comfortable because he was going to die,” Matt told The Durham News. “That was not an option.”

Max’s primary cardiac surgeon, Dr. Christopher W. Baird, director of the Congenital Heart Valve Center at Boston Children’s Hospital, Harvard Medical School, wanted to send Max to Michigan or Philadelphia for a double-lung transplant. But both hospitals ended up turning little Max down. Then, in February 2012, Max went into respiratory failure. He was placed on a breathing machine. It was at that time that Max’s parents started researching other options.

Max’s parents had discovered a study in which chemotherapy drugs were being used to treat children with pulmonary vein stenosis. While not considered a cure, it is hoped that the drugs will help attack the cells that grow and block the pulmonary veins. Matt was accepted into the study, and in that exact same month, he received open-heart surgery.

Matt had one of the best months ever following his surgery. The month was so good that the family was actually able to spend their only month together in their new home. The family hoped that the drugs would work, that they could avoid a lung transplant.

“It’s trading one disease for another,” the Berrios said. “His lungs have to grow. He’s there mentally, but his physical needs to be stronger. The transplant is plan B, so we’re pushing for him to keep his organs to grow with.”

But since May of last year, Max’s condition has worsened. Things got so bad that, last Father’s Day, Max had a violent retching episode that resulted in heart failure. He spent the next three weeks at Duke’s Cardiac Intensive Care Unit on a ventilator.

“I left everything in North Carolina on July 6, 2012 and jumped right on a plane to be with my boy,” Gina said. “Just because you have a chronically ill baby doesn’t mean the bills stop coming, so Matt stayed back home to continue working.”

Max and Gina have been in Boston now for the last nine months. Gina spends her days with Max ina a decorated hospital room, watching Mickey Mouse Club and Elmo. They spend time together lying on a play mat so that Max can work on sitting up and rolling over. Max is fed baby food several times a day through a feeding tube, and he’s on 30 different medications.

And it now seems that a transplant is Max’s best chance at survival since his heart function is being compromised by his lungs. Unfortunately, placing him on the list means they have to move closer to Boston because Max will need to be within four hours of the hospital for up to a year after the transplant. And waiting on a viable set of lungs could take up to six months, a year, or even longer. So the Berrios are now looking for someone to sell their home so that they can be closer to the lifeline that Max will need to receive the transplant. And that means rearranging life amidst the struggle of making sure that their son receives what he needs.

“We’re at a crossroads,” Matt said. “There are loose ends to close and I have to do the packing. We’ve got three dogs and things we have to decide what to do with.”

But even after the transplant, the Barrios can’t expect much.

“The stats are five to seven years with the transplant,” Matt said. “If we’re lucky, we have maybe 10.”

Yet, despite all the struggles, the family says they don’t want people to feel sorry for them. In fact, they say they’re proud to be Max’s parents; he has given them strength and an appreciation that they might not otherwise have.

“I tell people don’t feel sorry for us,” Matt said. “You see parents screaming at their kids, and we appreciate everything we have. Five years ago, he wouldn’t have made it this far. Not many kids have it, but some have. We’re going down swinging.”

And for Gina, being mom to Max has helped to put life in perspective.

“I hope this story gives others strength, determination, hope, faith and appreciation of what life gives. Before Max, I used to complain about ridiculous things like daily errands and housework, lesson plans for teaching and the weather,” she said. “Seeing Max every day, with his smile, silliness and feistiness and ready to fight this battle gives us strength. That right there gives us strength to fight right along with him every step of the way.”