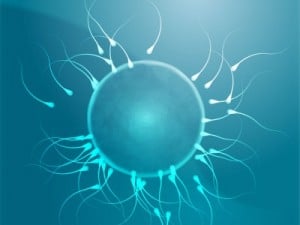 While most everyone understands the basics of how conception works, there is still so much to be discovered. Researchers have long been intrigued by the journey that sperm must make to get to the woman’s fallopian tubes to fertilize an egg. Even more complex and misunderstood is the biochemical reaction that happens between egg and sperm during the fertilization process. UCSF’s Yurly Kirichock, PhD and his team of researchers have recently made some recent discoveries that have helped shed some light on this subject.

It started a few years ago when Kirichock mastered and refined patch clamping, a process that uses a glass pipette, a tiny electrode and a voltage source to measure the electrical conduction within a nerve cell. This process also helps researchers in working with and examining sperm cells, which are smaller and more difficult to work with than most cellular structures.

Mastering patch clamping led to other discoveries – like the one that Kirichock and his lab group made last year that sperm cells do not move on their own accord. They must first come into contact with the female reproductive system which triggers a pH change from acidic to alkaline. Without this change, the tail of the sperm does not activate and it cannot move.

As sperm nears the egg, the tail actually becomes hyper-activated. This occurs because of progesterone secretions of the egg. But the progesterone serves an even bigger purpose for the sperm. Progesterone acts like a key to a gated channel on sperm. This channel is formed by protein known as CatSpers. By unlocking the protein channel, the sperm is electrically activated by calcium atoms, which readies the sperm for its final drive and, hopefully, entry into the egg.

What makes this information so interesting is that no other cell responds to progesterone like sperm. In addition, sperm does not react the same to other forms of progesterone, like the RU486, which is a combination drug that terminates early pregnancy.

Kirichock believes that, with this knowledge, it should be possible to disrupt the chemical process that happens within the female reproductive system. He believes this can be done by targeting the channel with a new type of birth control – one that would be more effective and present fewer side effects than the current synthetic forms of progesterone-containing birth control. He has actually already identified some possible drugs.

Even more astounding is that Kirichok may have discovered an answer to infertility. He believes that certain medications actually bind to the CatSper, making the progesterone key ineffective at unlocking the channel needed to activate the sperm. One example he gives is the use of certain types of beta-channel blockers used to treat various forms of heart disease.

While there aren’t any definitive answers here, there are definitely some astounding discoveries – discoveries that may soon change infertility and birth control as we know it today.