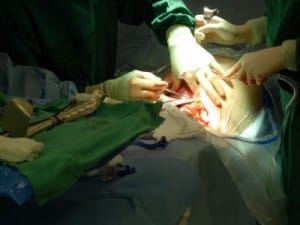 In 2002 the National Institutes of Health launched a big study on fetal surgery after the Spina bifida operations got caught up in a debate regarding their safety. The preliminary results of the study were released Wednesday and show that the fetal spina bifida surgery gives baby a better chance of leading a normal life.

Spina bifida means split spine. During pregnancy it happens when the fetus spine does not develop properly and the spinal cord sticks out through an opening in the spine. Children suffering from the condition are often paralyzed from waist down, may need crutches or wheelchair or have weakness below the waist. They may also suffer from incontinence and fluid deposition in the brain.

In the mid 1990s doctors began performing fetal surgery to rectify this spinal defect. The operation involved cutting the mother’s abdomen and uterus and closing the gap in the spine. But at that time no long-term research had been done on the outcome of the procedure. It also carried the risk of premature birth or other health complications to the baby and the mother.

By 2002, although 230 spina bifida operations had been done, some doctors remained skeptical. The government then launched a study that involved Vanderbilt, the Philadelphia hospital and the University of California, San Francisco. Other hospitals too agreed to stop the procedure until the study results were out.

Now, it has been shown that the operation done inside the womb to fix a hole in the spine can definitely lead to better outcomes for kids with spina bifida.

“This is the first hope for spina bifida fetuses,” said lead researcher Dr. Scott Adzick of Children’s Hospital of Philadelphia.

The government funded study found that those babies who underwent a fetal surgery were more likely to walk without crutches and also less likely to need a tube to drain the fluid inside the brain.

The researchers studied 158 babies, who had surgery either inside the womb between 19 to 25 weeks of gestation or after birth. They found that after a year 40 percent of the fetal surgery group needed drainage tube for the fluid deposition in the brain compared to 82 percent in the group that had surgery after birth.

At 2 and half years the fetal surgery group scored higher in a test to show their motor skills and mental development. Also 42 percent of these babies could walk without support compared to only 21 percent in the standard surgery group.

But the risks related to fetal surgery were still found to be true as 80 percent of this group saw premature birth as compared to 15 percent in the after birth surgery group. Children were born 1 1/2 months early and had more breathing problems in the former case. One third of the mothers also had thinning in the wall of their uterus which may lead to cesarean delivery.

Doctors believe that fetal surgery is a very specialised operation and though the study does show better outcomes for babies, the results may vary in hospitals that do not have specialized staff to perform the procedure.

On the other hand, although spina bifida in babies can be detected quite early in pregnancy, the after birth surgery cannot reverse the nerve damage that has already occurred. Food fortified with folic acid reduces the risk of spinal defects and since 1998 the US government has mandated fortified cereals, breads and pastas. This has resulted in reduction of spina bifida cases.

To chose fetal surgery or a post delivery surgery is still a dilemma that many parents might face but the study clearly raises the hope of a child leading a better life with spina bifida  surgery in the womb. – Atula, Staff Writer