An abandoned newborn baby is lucky to be alive today after it was wrapped in a bag and discarded earlier this week.  Luckily a woman was passing by, while walking her dog and she discovered the baby girl.

The Harris County Sheriff’s Office said that around 7.00 pm on Tuesday evening they received a 911 call from a resident of the complex when she noticed a plastic grocery bag left on the curb.

Her dog picked up the scent and on closer inspection, the woman was shocked to find a newborn baby girl inside.

When Cy Creek Fire and Rescue responded they found that the baby girl was alright and had no difficulty breathing. She also had about 3 inches of her umbilical cord still attached. 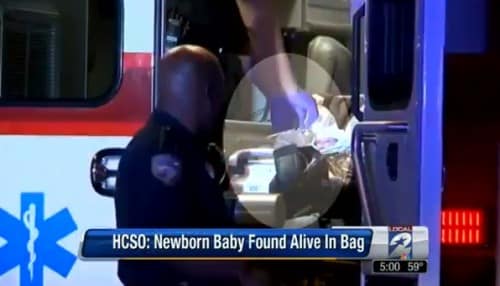 “The infant is alive, appears in good health,” said Sgt. Gordon Trott of the Harris County Sheriff’s Office. “Somebody had already cleaned up the child before placing the child on the curb.”

Texas law allows anyone to leave a baby at a hospital or a fire station and the officers say that while they are looking for the mother, they cannot understand why she left the baby in such a condition.

Sgt. Trott adds, “If it had not of been for the resident that came out to walk her dogs, that child may have laid there all night, possibly would’ve died.”

The baby girl is at the Texas Children Hospital and is said to be well.  Hopefully she will find a loving family to give her a new start.