When it comes to infant health—particularly premature infants—beneficial gut bacteria is absolutely critical. Unfortunately, while formula makers have done their best to create a quality substitute when breastfeeding isn’t an option, there are still some missing components in the current infant formulas. 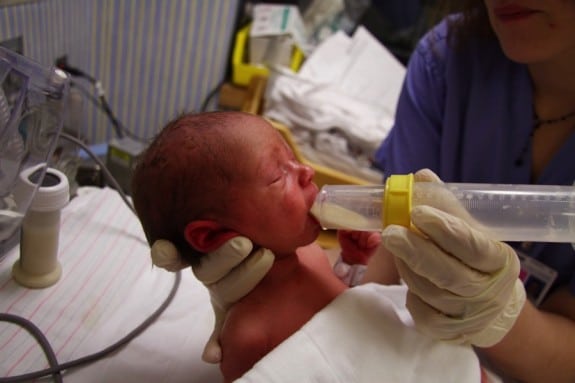 The evidence can be seen in the results of countless studies: breastfed babies have more diverse gut bacteria, they get fewer ear infections (on average), they’re less likely to suffer from asthma and allergies . . . the list goes on and on. This is why so many health organizations encourage mothers to breastfeed or as long as possible. But what about when breastfeeding just isn’t an option? And what of prematurely born infants that truly need those extra components to ensure they grow and gain weight?

According to Katie Hlinde, a co-author of a new article and an anthropologist at Harvard University in Cambridge, Massachusetts, the solution may be found through studies of breast milk.

Researchers really don’t know why breast milk is so much better. Or why it’s so varied from one woman to the next. Or why, even for the same woman, it can be different based on the gender of their child. And science only knows about a handful of the genes that are used to make breastmilk. So it’s no wonder that formula is still struggling to catch up to the quality of breast milk.

There is some good news, though.

Science has untangled a few mysteries about breast milk. For example, it’s been found that human breast milk has a greater concentration and diversity of sugars called oligosaccharides, when compared with other animals – even other primates. And, because the human digestive system is unable to break those simple sugars down, they’re passed to the gut, intact, and feed trillions of microbes found there.

One particular strain, Bifidobacterium, seems to really thrive when these sugars are present. Some of them produce short-chain fatty acids when they break down milk sugars, researchers say. According to some studies, these fatty acids may be important in protecting against the development of allergies. They may also be tied to better immune function because of how they power cells in a baby’s colon.

Unfortunately, all of this doesn’t make much sense when you add in the difference in genetics, or factor in if or how a baby’s genes may play a role. Better understanding these factors could help better pair premature infants with donor milk that will best meet their nutrient needs. It could also lead to a better design of formula. Hlinde said.

“Breast milk enhances certain populations in the microbiome, but what exactly are they doing there, and if you take them away, would that collapse the whole system?” David Sela, a genomic biologist at the University of Massachusetts, Amherst, who was not a co-author on the new paper, told Live Science.