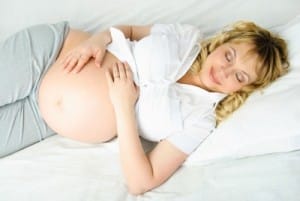 For ages, doctors have prescribed bed rest to women with high risk pregnancies. Yet there’s no evidence that it actually works, and most doctors are aware of this fact. What’s more, a recent study, published in the latest issue of Obstetrics & Gynecology, suggests that bed rest may even complicate matters for both mother and baby.

The recent study, conducted by the National Institutes of Health, took a look at a study of treatments for women at risk for premature birth because of a “short cervix” – a complication that is being increasingly diagnosed among pregnant women today. A total of 646 women were involved in the study, and doctors were told to feel free to decide if the patients needed to restrict activity (bed rest). Prescriptions ranged from no sexual activity to partial and complete work restrictions, all the way down to complete restriction of activity.

“The data suggests that bed rest does not prevent preterm birth in this high-risk population, but it definitely doesn’t answer that question,” Dr. Catherine Spong, a maternal-fetal medicine specialist at the National Institutes of Health and co-author of the study told Fox News.

Estimates suggest that 1 in 5 moms-to-be are told to restrict their activities during their pregnancies – everything from cutting back hours at work to complete bed rest. But is it ethical to keep women on bed rest when there’s no evidence to support it?

Some specialists say “no.” In fact, they’ve said that, until strict studies can be done to gather more factual information about whether or not bed rest is beneficial at all, doctors need to err on the side of caution and stop assuming that telling a patient to “take it easy” can’t hurt.

“Bed rest is misperceived as an inexpensive, innocuous, logical recommendation,” Dr. Joseph Biggio Jr. of the University of Alabama at Birmingham wrote in the medical journal.

And a trio of obstetricians and ethicists at the University of North Carolina Chapel Hill seem to agree. After conducting a separate review of previous studies, they say it’s actually unethical for doctors to continue prescribing bed rest, unless they are participating in a clinical trial to determine the efficacy of it.

So, if there’s no evidence to support it, and some specialists believe it shouldn’t be prescribed, why are there still doctors encouraging their patients to go on bed rest? According to Dr. Spong, there just aren’t a lot of options when it comes to preventing prematurity and other complications during pregnancy.

But that something may actually be doing more harm than good. While the women in the most recent study may simply have been at a higher risk for delivering prematurely, it is quite clear that a higher percentage of women prescribed bed rest delivered early. What’s more, researchers from the study pointed out that previous studies have linked bed rest to complications like stress and anxiety – both of which are linked to premature birth and smaller babies. Additionally, bed rest puts the mother at higher risk for dangerous blood clots, bone loss and muscle loss.

So should women refuse bed rest if their doctors bring it up? Sandy Lutton, a mother who spent the last 18 weeks of her pregnancy lying flat, not even permitted to prop up with a laptop, said that, even though it was stressful, she doesn’t know that she would have ignored her doctor’s recommendations.

Her son had been born on time, but after losing a second baby and finding out that she had a weak cervix while pregnant with her twins, she was willing to do anything it took to keep her babies. Doctors stitched her cervix closed and then recommended that she follow strict orders for bed rest. However, the doctor did stress that they had no idea if resting would even make a difference.

“I’m not going to sugarcoat it, it was stressful,” Sandy told Fox News. “I had a lot of time to sit and worry.”

Sandy said she moved around even more than she was supposed to on exam days, just to see if it made a difference. But every time, the ultrasound revealed that her cervix had remained closed. And, as fate would have it, it stayed that way until doctors removed the stitch so she could deliver her twins. Now she’s mom to healthy two-year-old twins.

But March of Dimes medical advisor, Dr. Siobhan Dolan, says that women like Sandy shouldn’t hesitate to ask about the pros and cons of bed rest if their doctor prescribes it. Still, she says she understands the lack of questions.

“Sometimes you feel less regret if you did something, even though it didn’t change the outcome,” Dolan, who has prescribed bed rest less often over the years, told Fox News.