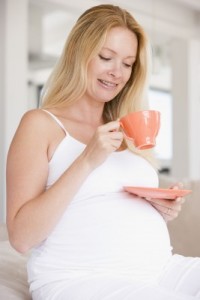 Researchers have found that pregnant women who drink large amounts of coffee daily have a higher chance of giving birth to small babies. Six cups a day can be enough to significantly affect fetal growth.

Researcher Rachel Bakker and colleagues at Erasmus Medical Center in Rotterdam followed more than 7,3000 Dutch women during their pregnancies. Using ultrasounds to detect fetal growth, the researchers fond that mothers who consumed large amounts of caffeine, the equivalent of six cups of coffee, had infants that measured smaller both during and after pregnancy. These infants were slighter shorter than those born of mothers who drank less caffeine.

The results of this study join other, conflicting studies on the effects of caffeine during pregnancy. While some studies show that even moderate caffeine consumption can cause low infant birth rate, other studies have found no link.

Bakker feels that this study shows that pregnant women should not drink more than six cups of coffee each day, however that does not mean that drinking less coffee is safe.

“We only studied the effect of caffeine on fetal growth,” Bakker said. “Future studies on possible other effects of maternal caffeine intake are therefore needed.”

The March of Dimes recommends women drink no more than 200 milligrams of caffeine each day, roughly the amount in 12 ounces of coffee. – Summer, staff writer