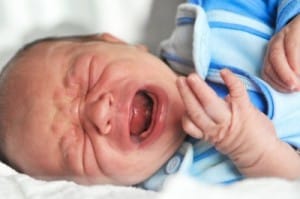 Colic, classified by inconsolable and inexplicable crying in infants, affects about one in five infants. Onset most commonly occurs around six to eight weeks of age and infants may experience colic for several months. To date, no one really understands why colic occurs, although gastrointestinal pain has thought to be the source for quite some time. A new group of researchers, however, believes that colic may actually be a form of early migraines in babies.

For the study, Dr. Amy Gelfand, a child neurologist from the University of California, San Francisco School of Medicine and her colleagues surveyed 154 new mothers at their children’s two month check-up. During the child’s examination, doctors asked moms if they had ever been diagnosed with migraines. They were also given a questionnaire that is designed to screen patients for a history of migraines. Infants were then examined and doctors discussed the potential issue of colic with the infant’s mother.

If the theory is true, handling a colicky baby may be much like nursing a migraine headache – a condition that is often creates extreme sensitivity to light and sound. In other words, turning down the lights and creating a quiet environment may be just as beneficial for infants as it is for their migraine suffering mothers.

The idea is based on the theory that migraines have genetic factors that predispose children of migraine sufferers to the condition later in life. This theory, however, has not been fully proven. But even if migraine predisposition could be proven, researchers really have no way of determining whether the pain is, in fact, from headaches or from another type of discomfort.

Researchers from the study do confirm the fact that they have no real proof that infants are actually suffering from migraines. They say that the findings do not associate a cause and effect link, but they do indicate a potential link.

Whether the findings hold some truth or not, it can’t possibly hurt to try dimming the lights and reducing noise around your infant. Having five children, all with some degree of colic, I would have been willing to try almost anything when they were little!