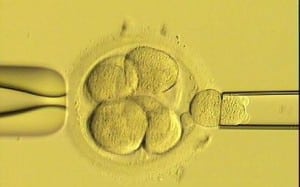 When a woman agrees to donate her eggs to another couple in need, hormones are given to stimulate the ovaries so that additional eggs can be produced and harvested. Experts have long wondered whether or not this could decrease the chances of fertility for the donor. Until now, few studies had examined the potential of any long-term fertility effects, but researchers at the Center for Reproductive Medicine in Brussels, Belgium have set out to change that.

Based on their study, which included a telephone questionnaire of 194 women, with an average age of 30, who had donated their eggs between the years of 1999 and 2010, researchers evaluated the possibility of infertility after egg donation. Study authors timed the interviews so that they fell at least four to five years after their voluntary egg donation.

Out of the women surveyed, 60 of them had tried to get pregnant after their last donation. Of those 60, a total of 57 were able to conceive without any assistance. The three remaining women required the help of a fertility specialist, but only needed help regarding her own fertility. The other two women who needed fertility help sought treatment because their partner was infertile.

Researchers did note, however, that sixteen percent of all egg donors experienced a change in the menstrual cycle after the procedure. According to the study author, Dr. Dominic Stoop, this is both an explainable and temporary side effect but it does not affect long-term fertility rates.

“Menstrual pattern could be disrupted temporarily by hormonal changes due to ovarian stimulation, much like how menstrual changes also appear after stopping an oral contraceptive,” said Stoop.

Dr. Orhan Bukulmez, an infertility specialist at University of Texas Southwestern Medical Center in Dallas who was not involved in the study conquered with the evidence found in Dr. Stoop’s study, saying, “In the short term, egg donation appears to have no effect on fertility.” He added, however, that more long-term studies are needed to determine if there are any other long-term effects.

One of the long-term effects in question is that of early menopause among egg donors. Some researchers are concerned that the extra hormones delivered during egg stimulation may cause possible trauma to the ovaries, forcing the body to go into early menopause. To date, no data has been found to validate this concern, however.

Additionally, the researchers indicated that the study does not reflect the possible fertility risk to women who harvest and freeze their own eggs for later use; cancer patients are an example of one group of women that might have this procedure done. They also say that the study should not be used to address the generalized population since egg donors are generally a very select group of patients who are selected based on their ovary and physical health.

“They may not be representative of the fertile female population as a whole,” said Bukulmez.

What is also not talked about in this study is how many times the donor donated and if going through the process multiple times increased your chances of having issues down the road.