Home » Study: Enzyme may Protect Babies from Effects of Stress during Pregnancy 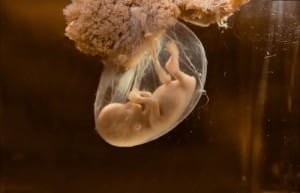 Scientists have known for quite some time that stress during pregnancy can have lasting, adverse effects on a developing fetus. And more recently, researchers have found that infants exposed to high levels of stress while in utero are more likely to suffer from anxiety, depression and other neurological disorders later in life. Though it is still unclear how this really happens, researchers from the Edinburgh University now believe they have discovered an enzyme that may counteract stress hormones and prevent these adverse effects altogether.

Professor Megan Holmes, a neuro-endocrinologist at Edinburgh University and the British Heart Foundation Centre for Cardiovascular Science says that she and her team now believe that the enzyme known as 11 beta-HSD2  is responsible for fetal programming that happens while in utero. This same enzyme can be found in the mother’s placenta and in the developing baby’s brain. She and her team believe this enzyme actually provides a protective shield against stress hormones, and that it is possible that, by giving mothers exposed to high levels of stress, adverse effects of stress hormones can be prevented.

“The stress hormone cortisol may be a key factor in programming the fetus, baby or child to be at risk of disease later in life. Cortisol causes reduced growth and modifies tissue development,” Holmes told Scotsman.com.

The team came to this conclusion after a study on genetically modified mice. The mice were bred to lack the 11 beta-HSD2 enzyme. Their mothers were also exposed to high levels of stress during pregnancy. According to Holmes, “these mice exhibited reduced fetal growth and went on to show mood disorders later in life.” What’s more, the placentas of these mice were smaller, and they didn’t seem to transport nutrients as well as those that had the enzyme.

Holmes says there is a “natural variation” of this very same enzyme in humans. They believe this could mean that some women have lower levels of these enzymes, and when they are exposed to stress, their babies do not receive the same amount of protection from the stress hormones. If scientists could discover exactly how the enzyme protects the developing baby, researchers say that women could be treated in the future with the enzyme to help prevent adverse effects. However, Holmes says that this type of treatment would likely be targeted towards women that are in severely stressful situations where the baby would be at highest risk.

“Most of the stresses that are used in this research are long and chronic,” she said.