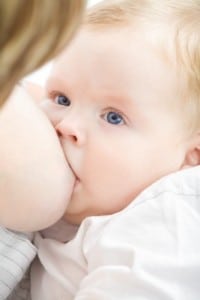 As soon as you become a parent you will be told by everyone that you need to get your baby on a schedule for sleeping and eating.  And while this may make you feel more organized, a new study, which was presented at the European Congress on Obesity in Istanbul, finds that parents should “trust” their baby to decide when and how much they want to eat – and even use feeding to soothe them when they are crying.

Researchers at Queensland University Technology in Brisbane, Australia have revealed that “on demand” feeding leads to healthier weights later in the baby’s life than traditional “scheduled” feeding.

They also found that feeding your baby to soothe them was considered fine as long they were not using “coercive methods” to “override” the baby’s innate appetite.

“Baby’s have an innate capacity to regulate their intake. We are advising mothers to trust their baby. The parents provide and the baby decides.

“The mothers provide the nutrition and the baby decides how much it wants to eat.”

Traditionally, babies are to be fed every four hours to establish a schedule, but some new nursing moms panic when their babies want to feed more.

When nursing, feeding on demand is better because it provides food when the baby wants it and it helps establish a good supply.

During their test Professor Daniels and her team followed 293 new mothers for the first two years of their babies’ lives.

Each was interviewed on their parenting style and feeding practices and then their babies weight was measured at 14 months.

“We found that with responsive feeding which is feeding on demand that the babies were more likely to have lower weight status,” she said.

‘If the mother is responsive, she is responding to the child’s cues of hunger and not over-riding them.

‘Whereas, if a mother feeds in schedule, she decides whether or not he is hungry and is more likely to make the child finish the bottle.’

She said breast feeding appeared to be easier method to feed on demand as it was more convenient and making up a bottle was harder to do every time the baby wanted to feed.

Professor Daniels also noted that older children should have more of a routine. But they should still not be forced to eat more than they want and should not be made to finish what is on their plate.