It’s every parent’s dream to have their children get a good night’s sleep, because when the kids sleep, mom and dad sleep, too. However, a new research study shows that children who sleep less are more likely to become overweight than those who sleep more. 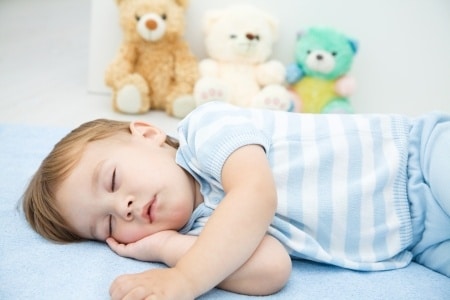 Researchers studied over 2,500 children aged 16 months and found out that those who got less sleep would eat a tenth more calories than the other children who had slept longer. The study, which was published in the International Journal of Obesity revealed that children who slept for less than ten hours a day ended up consuming on average 105 more calories daily than their peers that slept over thirteen hours. The researchers say that these extra calories early on in life can set children up for a risk of obesity and other related health problems later on in their lives.

Conducted at the University College London, the research study examined 1,300 sets of twins, monitoring their sleep patterns at the age of 16 months, and subsequently tracked their diet over the next five months. They found those children who had slept less than ten hours would consume on average 1,087 calories, while those who got more than ten hours of sleep only consumed about 982 calories. The researchers are unclear of why this difference occurs, but did theorize that the regulation of appetite hormones may be disrupted by shorter sleeping patterns.

Obesity campaigners have said that tired children were more likely to become cranky and irritable, at which point their parents would end up giving them more food in order to soothe them. There have been previous research studies linking lack of sleep to obesity, however this study is the first of it’s kind to show a direct link between hours slept and calories being consumed in children so young. Dr. Abi Fisher, from the UCL Health Behavior Research Centre comments

“We know shorter sleep in early life increases the risk of obesity so we wanted to understand whether shorter sleeping children consume more calories. Previous studies in adults and older children have shown sleep loss causes people to eat more but in early life parents make most of the decisions about when and how much their children eat – so young children cannot be assumed to show the same patterns.”

Dr. Fisher says that more research was needed to figure out why it was that children who would sleep less, ate more. The study has found that increased energy intake from food was the reason for the weight gain. Tam Fry, from the National Obesity Forum weighs in, suggesting that children who are tired and lacking sleep would likely seek food to give them an energy boost throughout their day, adding

“When adults don’t get enough sleep they snack more and feed themselves with comfort food. It’s slightly different with babies but they become irritable so parents give them more food to soothe them believing it’s an act of love.”