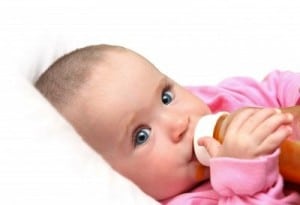 Researchers have found that some encouragement from a doctor during the 9 month checkup could be key to helping parents start to wean their child off of the bottle.

Dr. Jonathon Maguire of St. Michael’s Hospital in Toronto, Canada led researchers in a study where they followed the cases of 201 kids till they were 2. The kids were divided into two groups where the parents of one group were advised about the importance of weaning during the 9-month check-up while the other group was given normal nutritional advice by their doctors. After a two year period the group that had been given ‘intervention’ advice was found to have just 15 percent babies who were using bottle compared to 40 percent bottle fed babies in the other group.

The process of weaning involves removing the bottle one meal at a time and avoiding using it in bed.

“So you put all of these factors together, you say, ‘Wow, the risks really mount as the child gets older.’ So clearly there comes a point in time when using a bottle is not good for you.”

The American guidelines for weaning babies from their bottles is 15 months, but the doctor says that many parents are not aware of this and they continue to give bottle to their kids. Experts believe that when the infant sleep with their bottle filled with juice or milk, for a prolonged period of time, it may lead to the progressive destruction of the bone or teeth known as ‘baby bottle tooth decay’ or ‘nursing bottle caries’. This process usually happens in the age between 1 and 3 years and the decay develops rapidly causing severe pain and infection according to the American Dental Hygienists’ Association.

This is why it is important for parents to stop bottle feeding at the appropriate time according to Dr. Maguire as it is interfering with the health of their children. Nine months is the time as the baby is already getting nutrients from solid foods. The older a child gets, the harder it becomes to modify his habits warns the doctor. – Atula, Staff Writer