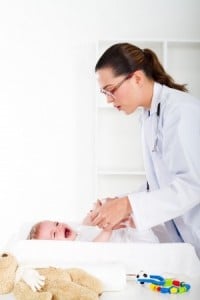 When we parents think of the flu, we think of a common but nonfatal virus. However, this common misconception couldn’t be further from the truth. In fact, a recent study from the Centers for Disease Control and Prevention recently found that even healthy children can die from the flu in as little as three days after symptoms start.

According to the recent study, flu complications killed 830 children in the United States between 2004 and 2012. Alarmingly, most of those children were healthy before coming down with the illness, with almost half of them having no medical history that would indicate they would be at risk for dying from the flu. Thirty-five percent of them died within three days of developing symptoms and before they’d ever even been hospitalized.

Researchers that reviewed the deaths also found that the majority of them had not been vaccinated for the flu. In fact, only 22 percent of children with a high-risk medical condition (asthma, lung disease, cerebral palsy, seizure disorder, genetic conditions, heart disease and cancer) had been vaccinated, and only 9 percent of all healthy children that died had received a flu vaccine.

“We found these influenza-related deaths can occur in children with and without medical conditions and in children of all ages, and that very few of these children have been vaccinated,” Dr. Karen Wong, a CDC medical epidemiologist, lead author of the study, told HealthDay. “About a third of these children die within the first three days of their reported symptoms.”

Wong says that she doesn’t know why so many of the children died so fast, but one expert, Dr. Marcelo Laufer, a pediatric infectious diseases specialist at Miami Children’s Hospital, says he’s not surprised that so many otherwise healthy children died before being admitted to the hospital.

“First, parents don’t realize that flu can be fatal,” Laufer told HealthDay. “[Second, parents of children with chronic conditions] know the system better, so they come earlier than healthy patients.”

What’s more, the flu virus can progress very quickly. It is for this reason that the CDC and experts encourage prevention, rather than just treatment.

“That’s why we recommend every child 6 months or older get vaccinated every year,” she said.

For infants under 6 months of age, vaccination isn’t an option. For this reason, women should be vaccinated with a flu shot during pregnancy to help boost baby’s immunity prior to birth. Also, family members that are likely to be around the baby should be vaccinated to help provide the “cocoon effect” for the newborn baby.

Even if vaccinated, children can still come down with the flu. Should this happen, the child should be watched carefully for any signs of dehydration. Wong also suggests that parents get in touch with their child’s doctor as soon as symptoms start.

“That’s especially true for kids with high-risk medical conditions and for very young children,” Wong explained. “These children are at especially high risk for flu complications.”

However, Laufer says that a phone call isn’t enough.

“It’s very difficult for a pediatrician on the other side of the phone to understand how sick the child really is,” Laufer said.

He suggested that parents take their child to the doctor or emergency room if their child appears sicker than one would expect with a common cold.

Wong added that, for high-risk children, antiviral treatment early on is absolutely essential. And children who seem extremely ill may ask for the same treatment, which includes drugs like Tamiflu, Relenza, Symmetrel and Flumadine.

“That’s another thing they can talk to their health care provider about,” Wong said.