When we have a child, it is absolutely fascinating to watch them grow and reach their very first milestones. We get to see their first smiles, listen to their first giggles, and watch as they begin to move around, crawling and scooting their way across the floor. There is an indescribable pride that we feel when those all happen. But a new study has found that babies who were born in the winter tend to begin crawling earlier than those who were born in the summertime. 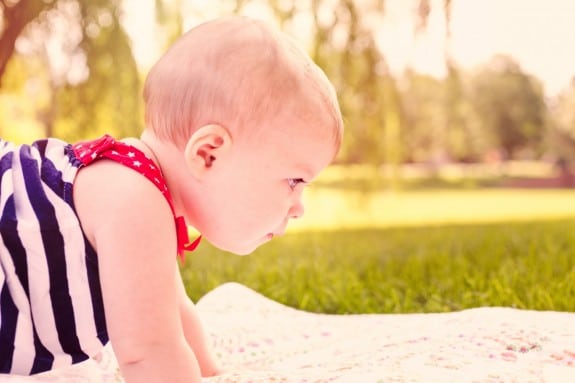 Israeli researchers conducted a small study, examining 47 healthy babies who were on track with typical development, and have learned that those children born during winter months, up until spring months, end up crawling on average about five weeks earlier than their summer or autumn-born counterparts. According to information provided by the NHS, babies should begin crawling anytime around the ages of six to nine months old.

Researchers believe that one theory is that babies born in the winter may begin to crawl earlier because they will typically start crawling during the summer months, where days last longer and there is more sunlight. Researchers believe that these children are active for longer periods of time and tend to wear fewer layers because of the warmer summer temperatures, and because of this, spend more time on the floor on their tummies.

However, researchers did state that these findings were specific to the area of Israel, where the home environment is very different between summer and winter. They also said that in countries where the home is typically the same all year round, because of climate control and central heating, this same effect was not noticed. The 47 babies that they studied were divided up into two separate groups, with the first 16 being born between the months of June and November, these children being the “summer-fall” babies. The other group, comprised of 31 babies were born from December to May, being the “winter-spring” babies.

All of the children were observed at home by researchers when they were seven months old. A second observation was done when these children began crawling. Parents were asked to keep a record of the stages of their child’s development before as well as in between the observations by the researchers. The researchers employed the use of the Alberta Infant Motor Scale (AIMS), which is a well-known and oft used measurement scale, looking at what position the child is in. The scale itself has four positions; prone (when the child is on their stomach), supine (when the child is on their back), sitting, and standing. On average, babies were 31 weeks old when they began to crawl.

Children who had been born in the winter, that began crawling in the summer, began at 30 weeks, while babies who were born in the summertime, starting to crawl in the winter, began on average at 35 weeks old. These “winter-spring” babies had a higher overall AIMS score, than the “summer-fall” babies. This was especially true for the children’s movement in the “prone” position. In the study, researchers said, “The difference in crawling onset of four weeks constitutes 14 percent of a seven-month-old’s life.” That is a large percentage of the child’s life. They also added, “The geographic location and the local climate where the study is conducted is important to understand the findings.”

The researchers believe that these findings may help to make parents more aware that they can provide opportunities for their children to crawl and move around more in the winter months. They said, “The season influences the babies’ experiences in a number of ways, including layers of clothing that are worn; the opportunities babies are given to spend on the floor on their stomachs and the hours of activity and daylight.”