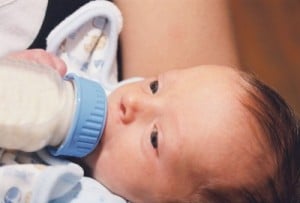 A new study has found that infant weight gain can vary greatly based on which infant formula they are drinking. Babies who drink formula made from cow’s milk may be overeating and gaining too much weight.

A research team, lead by Dr. Julie A. Mennella, set out to find out if different formulas created different results. The team divided  56 formula-fed infants into two groups. One group was given the most common cow’s milk based formula, the second group was given a hypoallergenic formula(Alimentum, Nutramigen, Pregestamil).

The two groups of infants began drinking the formula at 2 weeks, and were monitored until they were seven months old. The infants were fed on demand, and parents were told to stop feeding their children as soon as the child indicated they were full. At the end of the study, the cow’s milk formula fed infants consumed more formula and weighed almost 2lbs more.

“The next question to ask is: ‘Why do infants on cow’s milk formula overfeed?'” Mennella said.

Between the two groups, there seemed to be no differences in their linear growth. Only the overall weight and amount of formula consumed were different.

“When you compare them to the ‘gold standard’ of breastfeeding, the babies (on hypoallergenic formula) looked like breastfed babies,” said  Dr. Mennella

Like standard formula, the hypoallergenic products contain cow’s milk proteins; the difference is that the proteins are broken down so that they are less likely to spur an allergic reaction compared with the intact proteins in regular formula.

And while breast milk is the best, hypoallergenic formulas are often recommended for infants who aren’t being breastfed and may have cow’s milk allergies or to those who have been born into a family with a history of severe allergies.

Dr. Mennella believes that understanding how early nutrition affects infants’ growth during the first year of life will help determine risks of obesity, type 2 diabetes and even heart disease years down the road.’

“Many factors contribute to infant weight gain,” she said. “However, studies like this strongly suggest that we need more research to better understand what regulates infant feeding and weight gain.”