The 1992 American Academy of Pediatrics’ “Back to Sleep” campaign has been a huge success, and has saved countless lives. In fact, the rates of Sudden Infant Death Syndrome (SIDS) has dropped by more than 50 percent since the initiative first began. However, the campaign is also being a big contributing factor in a whole new problem, one that has pediatricians carefully examining the heads of young infants during regular check-ups.

Positional plagiocephaly, more commonly known as “flat spots” on the head, may sound harmless, but doctors say that the condition can end up permanently changing a child’s facial features if left untreated. And with more and more cases occurring – nearly half of 440 infants between the ages of two and four months in a recent study conducted by the academy – experts are now trying to inform parents about the condition and how they can prevent it.

Elizabeth Simpson, a pediatrician at Children’s Mercy Hospital, says that she sees a lot of babies with small flat spots on their heads. She says that, because their skulls are more malleable during the first several months of life, they tend to change shape if they lie in the same position too often.

“We tend to let happy babies stay put,” Simpson told The Kansas City Star. “So unless baby starts crying, we’re liable to let them stay there.”

Most frequently, Simpson says that the spot shows up when parents allow their children to sleep or sit in a car seat, even when not in a car. Essentially, when lying in their car seats, they’re lying on their backs, and when added to the time already spent sleeping at night on their backs, it becomes too frequent of a position for baby’s developing skull.

“It might be better for babies if car seats stayed in the car,” she said. 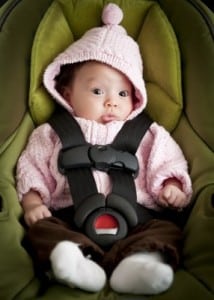 But car seats aren’t the only culprits. Swings, bouncy seats, even time spent on their backs on the floor can be a contributing factor. The only way to correct the issue (or prevent it from happening altogether), Simpson says, is to take baby off his or her back and either hold them or spend time with them on the floor.

Known as “tummy time,” floor time should be spent on the belly, under close supervision. This time is important for keeping the head from flattening, but it’s also important for normal, healthy development and strengthening of the neck.

Parents can also spend more time holding their babies, which is important for bonding and healthy development. Baby wearing, for example, has been shown to have a number of benefits, including baby-parent bonding, reduced crying in infants, faster weight gain in premature babies, and, of course, a reduced risk for flat spots on the head.

You can also make changes to how your baby sleeps without putting them at a higher risk for SIDS. Typically, when you lay an infant on its back to sleep, its head will rest on one side or the other. If you become more aware of which side your baby rested its head on last, you can alternate the position, which will also reduce the chances of them developing a flat spot on their heads.

If your baby does develop a flat spot, talk to your child’s pediatrician as soon as possible. The sooner it is addressed, the better. Most cases can be corrected with a few changes to how baby is handled. If, however, the flat spot continues or is not addressed soon enough, parents may have to take their baby to see a specialist. At that time, interventions, like wearing a helmet most of the time for three to six months, can be discussed. Regardless of what the treatment option is, something has to be done.

“If nothing is done, some of these kids can have permanent change,” Simpson said. “Not only is there a flat spot on the back of her their head, but one side of their face might protrude. One ear might be lower set.”

Study authors also suggested that parents discuss other flat spot prevention methods with their pediatricians prior to the two-month visit, so that all methods can be discussed before a problem develops.