Since the beginning of the “Back to Sleep” campaign, countless lives have been saved. However, there is a mild side effect of having a baby on their backs so much – an asymmetrical head caused by mild skull deformities.

While generally cosmetic rather than a severe complication, some parents become concerned over the shape of their child’s head. Some talk to their doctors and ask for treatment – one that includes the use of a helmet 23 hours a day from six months of age to one year. The hope is that the costly treatment (around £2,000) will help reshape the child’s head. 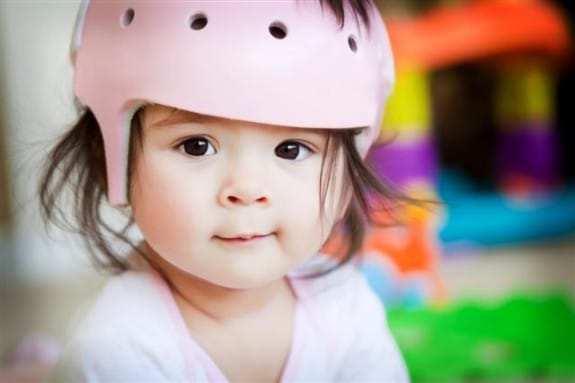 “The helmets have no added value compared to doing nothing and a helmet is an expensive treatment,” lead researcher Renske van Wijk, of the University of Twente, told BBC News. “All parents in the study reported one or more side-effects in the group where infants wore helmets. We would discourage helmet therapy in healthy infants, but parents with concerns should always speak to a doctor.”

Side effects that were noted in the infants who used helmets included skin irritation and sweating. And for some parents, the helmets gave them a feeling that they couldn’t cuddle their babies like they wanted.

Professor Brent Collett, of Seattle Children’s Research Institute, says this study was important because it was the first randomize controlled study of helmet therapy among children with asymmetrical head shape.

“Kids do not appear to grow out of asymmetric head shape, but we don’t know what the significance of that is yet,” he told BBC News. “At least in this study, treatment did not appear to make a significant difference.”

He adds that parents can take both preventative action as well as action that may help to improve a child’s head shape by placing babies on their tummy while awake. The important thing is to remember that putting a baby on their backs to sleep is still the safest position possible, and an asymmetrical head is not anywhere near the same risk level as Sudden Infant Death Syndrome.

“Parents should be reassured that they are doing the right thing to nurse their baby on her/his back when put to sleep,” Dr. Simon Newell, a consultant neonatologist and vice-president at the Royal College of Pediatrics and Child Health in London, told BBC News. “If this results in a change in head shape, they should rest assured that their child will not come to any long-term harm.”