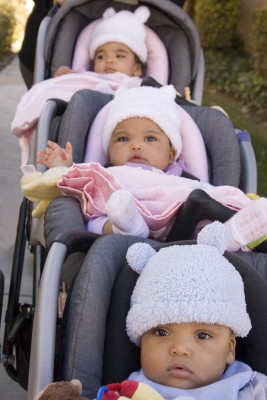 Having a baby is a joyful, but stressful time. New parents are exhausted, over-worked, and frazzled. They have very little time to connect with one another and they have to devise new ways to stretch the family income. That’s in the wake on a single baby. Consider what it must be like for the parent’s of twins or triplets.

The strain of raising multiples was put in the spotlight by the, very public, marital breakdown suffered by John and Kate Gosselin. Since then a study, conducted by Britain’s Twins and Multiple Births Association (TAMBA) has highlighted the toll taken on families of multiples. The study found that, financial strain results in the demise of 28 percent of marriages in this category. Of the families studied, 62 percent found themselves financially worse off after the birth of their multiples. Parents of singletons feel a financial hit only 40 percent of the time.

Mother’s of multiples are often unable to return to work as quickly as other mothers. The study found that, nine months after birth, mothers of multiples were 20 percent less likely to have returned to work; a circumstance that can exacerbate financial problems for the family.

The study suggests that families that include twins and triplets suffer ‘greater levels of material deprivation’ and that the children often go without key items.

Chris and Bernadette Lowe are a textbook example of the study’s findings.

Desperate to have children, in 2005 they excitedly welcomed triplets into their family. Two years later they were separated and are now waiting for their divorce to be finalized.

“We never imagined for a second the reality of actually having to raise three babies simultaneously,” recalls Bernadette. “The financial and emotional strain was too much. I cannot begin to describe the exhaustion and the sheer physical grind of caring or three babies – let alone the money worries.”

Chris looks back on the breakdown of their marriage with the same pain,

“The tragedy is that neither Bernadette nor I did anything wrong. All we wanted was a normal, happy family. Instead the bills mounted. We were up to our ears in debt. I was permanently worried about money and I became withdrawn. We were so busy with the babies; we never had time to try to patch things up.”

‘We weren’t the same people who’d fallen in love. There was no huge row. We just sat down and admitted it was over. I felt incredibly guilty. We’d gone through so much together,” remembers Bernadette. “If we’d had just one baby, I know we’d still be together. I look back at that starry-eyed couple happily expecting triplets and want to weep.”

Couples expecting multiples should go into the experience with their eyes wide open to the realities. Seeking financial counselling and establishing a game-plan and support network, before the arrival, may help to alleviate some of the strain on the family. – Jen R, Staff Writer