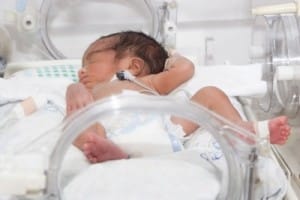 Babies that are born only a few weeks early are often cared for like full-term babies, according to a new study. However, this practice may put these babies at risk for health problems in their first few months.

Infants are considered full-term when they are 37 weeks gestation. Yet infants born between 34-36 weeks, called late-preterm, are often cared for in hospitals as if they were full-term infants. Dr. Ramzan Shahid, medical director of the newborn nursery at Loyola University Medical Center in Maywood, Ill., says this causes these infants to be more likely to need to visit an emergency room during the first month of their lives.

The study looked at infants that were born at 36 weeks gestation. These infants were more likely to need emergency room care within the first month of birth than those born at 37 weeks. They were even twice as likely to need to visit an emergency room than those born at 34 and 35 weeks along, often because these earlier infants receive slightly more care before being released. Breathing problems and jaundice were the most common problems the late-preterm infants faced. Dr. Shahid believes this is caused by too many doctors thinking a 36-week-old infant will fare as well as a full-term infant after birth.

“I think pediatricians feel that [the 36-week-old infants] are almost full term, and they feel that they will probably do fine,” Dr. Shahid said. “I think there’s a false sense of security that they have with the 36-week infants.”

Thirty-six week old infants often are the same size and look just like a full-term infant, making health problems harder to recognize early on. Problems such as feeding issues, blood sugar issues, and regulating body temperature are also common in 36-week-old infants. However, because these babies resemble full-term infants doctors do not notice these problems before discharging them from the hospital.

“The thing about these babies is some of them are big,” said Dr. Gabriel Escobar, a pediatrician at Kaiser Permanente Medical Center in Oakland, Calif., who has researched the health of late-preterm infants but was not involved in the new study. “So because the baby looks like a term baby, [it gets] treated like a term baby. And that’s not good.”

Nearly 70 percent of preterm births happen between 34 and 37 weeks. Often these infants are not cared for in the hospital NICU and are sent home at the same time as full-term infants. There is currently no standard of care for late-preterm infants in the US. Dr. Shahid hopes the findings of this study will encourage doctors and hospitals to take a closer look at late-preterm infants before sending them home from the hospital.- Summer, staff writer