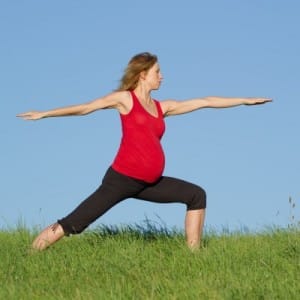 Obstetricians, physicians and pregnancy books have long told women that exercising during pregnancy offers health benefits for both mother and child. Now, experts have found yet another benefit – one that could actually be beneficial for baby after childbirth.

A research team at the Kansas City University of Medicine and Biosciences performed a study on 61 moms-to-be. Heart function monitoring, which took place four times over the course of the study,  included maternal-fetal heart function and infant heart function after birth. Moms in the study group had activity levels that ranged from power walking to running. Some of the moms even lifted weights or practiced yoga.

Women in the group that exercised at least thirty minutes, three times a week, had fetuses with lower heart rates. According to the team, this is a sign of heart health. But it goes further than that – infants whose mothers exercised regularly also had lower heart rates, a month after being born – indicating that benefits of exercise during pregnancy extend past the pregnancy.

“The system that controls heart function is known to improve with regular aerobic exercise and improved heart control function is evidence of a healthy cardiovascular system and overall health. Not only did the mothers’ exercise help maintain and improve their own heart health but it set their babies up for a healthier start,” Linda E. May, study collaborator and exercise physiologist and anatomist at the university stated.

May added, “It is my hope that these findings will show that efforts focused on improving health need to start during pregnancy rather than in childhood.” Results of the study will be presented at the Experimental Biology 2011 annual meeting in Washington, D.C.