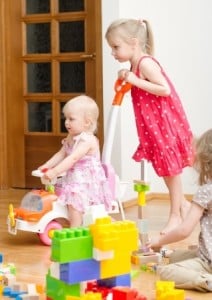 With cold & flu season in full effect, we try to do what we can to keep the kids healthy, but they keep bringing home the illnesses.

A new study by the University at Buffalo, however, sheds some light on why the virus seem to be sticking around for so long.  Bacteria that causes ear infections, strep throat and more serious infections in adults may last a lot longer than thought on inanimate objects such as furniture, dishes or toys.

Streptococcus pneumoniae and Streptococcus pyogenes persist on surfaces far longer than has been thought in the past in schools, hospitals and daycare centers.

“These findings should make us more cautious about bacteria in the environment since they change our ideas about how these particular bacteria are spread,” says senior author Anders Hakansson, PhD, assistant professor of microbiology and immunology in the UB School of Medicine and Biomedical Sciences. “This is the first paper to directly investigate that these bacteria can survive well on various surfaces, including hands, and potentially spread between individuals.”

While examining a daycare centre for the study, researchers found that four out of five stuffed toys tested positive for S. pneumonaie, and several surfaces, such as cribs, tested positive for S. pyogenes, even after being cleaned. The team noted that testing was done just before the daycare centre opened in the morning so it had been many hours since the last human contact.

After publishing work last year showing that bacteria form biofilms when colonizing human tissues, Hakansson and his co-authors became interested in the possibility that some bacteria might persist on surfaces.  And they were right.

“Bacterial colonization doesn’t, by itself, cause infection but it’s a necessary first step if an infection is going to become established in a human host,” Hakansson explained. “Children, the elderly and others with compromised immune systems are especially vulnerable to these infections.”

Researchers’ experiments found that even month-old biofilm of S. pneumoniae, a leading cause of ear infections in children and morbidity and mortality from respiratory tract infections in children and the elderly, and S. pyogenes, the bacterium that  commonly causes strep throat and skin infections in school children, survived for hours on human hands and persisted on books and soft and hard toys and surfaces in a daycare center, in some cases, even after being well-cleaned.

“In all of these cases, we found that these pathogens can survive for long periods outside a human host,” Hakansson said.  Even though scientific literature maintains that you can only become infected by breathing in infected droplets expelled through coughing or sneezing by infected individuals.

“Commonly handled objects that are contaminated with these biofilm bacteria could act as reservoirs of bacteria for hours, weeks or months, spreading potential infections to individuals who come in contact with them,” concludes Hakansson.

The findings, researchers suggest more research should be done to understand under what circumstances this type of contact leads to spread between individuals.

“If it turns out that this type of spread is substantial, then the same protocols that are now used for preventing the spread of other bacteria, such as intestinal bacteria and viruses, which do persist on surfaces, will need to be implemented especially for people working with children and in health-care settings.”