One of the many tools pediatricians use to assess babies is the standard head circumference charts. Used as a way to diagnose infants and toddlers with abnormally larger heads, or fast growing heads, they are a common part of a child’s check up. A new study, however, may show they are actually all wrong. 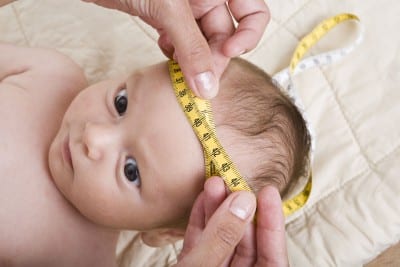 Infants and toddlers who have larger heads, or heads that grow too quickly, may have health issues that need to be addressed and cared for. To discover which children these are, most doctors use a head circumference chart to see where the child’s head is and how much growth has happened. Unfortunately, these charts may not be the tool we believe they are.

Researchers from The Children’s Hospital of Philadelphia has found that the charts are often inaccurate. This leaves hundreds of infants and toddlers who need care undiagnosed, and many more misdiagnosed leading to unnecessary tests and worry.

More than 75,000 infants were studied between August 2001 and January 2008. Comparing the standard charts used, they found that a high rate of misdiagnoses. Nearly 2.5 times more children were diagnosed by the charts than what should have been. Charts created by the The Centers for Disease Control and Prevention (CDC) and the World Health Organization (WHO) both diagnosed more than 5 percent of the infants to be above the 95th percentile.

“We were noticing that we had a larger-than-expected number of children labeled as having large and rapidly growing head circumferences,” Carrie Daymont, M.D., said.

An older chart, from 1977, actually had better results among the infants. This chart, however, was replaced with newer ones that do not curve as they should for ordinary growth patterns. Young infants, within the first three months, are often missed by the charts. While older infants and toddlers are too often over diagnosed.

“More research is also needed to determine how doctors can use head circumference growth curves to identify children with problems without causing unnecessary worry to parents of healthy children,” said David Rubin, M.D. , M.S.C.E., a pediatric researcher at Children’s Hospital and a senior author on the study. “We are currently working on research related to this question.”

More research is being done to see how the charts stack up against other groups of infants. – Summer, staff writer