Home » Study: Kids of Same-Sex Moms Do Better Than Peers 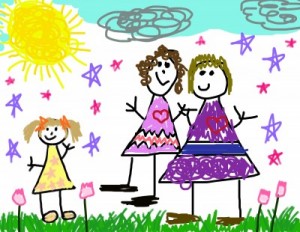 Two researchers from the US and Amsterdam combined to do the first ever study on children of same-sex moms. The results shocked many as it revealed that these children scored far higher than children of straight parents on many different levels.

Researchers Nanette Gartrell, a professor of psychiatry at the University of California at San Francisco, and Henry Bos, a behavioral scientist at the University of Amsterdam, tracked children who were raised by same-sex moms. Following the children from birth through adolescence, the researchers wanted to see how different children raised in two-mother families would be in social development. Previous studies had found no differences, though these studies often included the children of parents who had came out as lesbians later in life. For this study, the researchers wanted parents that identified as homosexual from the start.

While in areas of development and social behavior the two groups of children scored very similarly, the researchers were shocked to find major differences in other areas. Children raised by same-sex moms scored much better than those in traditional families when it came to of self-esteem and confidence. These children also did better academically, and had lower levels of reported behavioral problems.

“We simply expected to find no difference in psychological adjustment between adolescents reared in lesbian families and the normative sample of age-matched controls,” says Gartrell. “I was surprised to find that on some measures we found higher levels of [psychological] competency and lower levels of behavioral problems. It wasn’t something I anticipated.”

Of the children from same-sex parents, nearly half had reported teasing, ostracism or discrimination based on their parents. When the children were surveyed at age 10 there was some higher levels of stress due to these problems, however by age 17 the stress levels were average.

“Obviously there are some factors that may include family support and changes in education about appreciation for diversity that may be helping young people to come to a better place despite these experiences,” says Gartrell.

The researchers are not certain as to why the children of same-sex moms score better, but they think it has something to do with the negative discrimination these families face. Gartrell believes that same-sex parents make parenting a higher priority because they are aware that their children will face stigmatization. These parents may also be more likely to actively discuss topics such as tolerance and discrimination with their children.

More research is being planned for the future, and the researchers hope to collect data on two father families next. – Summer, staff writer