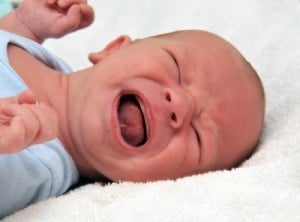 A mother, it is said can hear her baby cry even in her sleep. But despite this popular belief, French researchers on Tuesday said that fathers too are equally able to recognise their baby’s cry and it is not just a ‘maternal instinct’.

It has always been said that mothers are a better judge of their baby’s pain and cry than fathers and research done three decades ago proved this to be true. It was shown then that mothers were nearly twice as accurate as men in identifying the cry of their offspring.

But a new research suggests otherwise.

The study found that men and women are equally able to recognise their child’s cry and it depends on the amount of time spend with the child by either parent that really makes a difference.

A team, led by Nicolas Mathevon at the University of Saint-Etienne, did a small study with 29 babies aged between 58 and 153 days. The infant cries were recorded as they were taking bath.

Also, for the research 15 of the babies were in France and 14 in the Democratic Republic of Congo. This was done intentionally to see whether cultural and language differences had any affect on the outcome of the study.

All the mothers and half of the group of fathers spent at least four hours a day with their babies. The remaining dads spent less than four hours.

The parents were asked to listen to a recording of three different cries from five babies of a similar age, one of which was their own. There were two sessions of experiments.

The researchers found that 90 percent of the time parents were able to recognise the cries of their own baby.

Dads who spent less time with their also baby did well; recognizing their baby’s cry 75 percent of the time.

The study has been published in the journal Nature Communications. It says that the maternal instinct theory is false as the studies conducted during the 70s and 80s did not take into account the amount of time fathers spent with their babies.

“In biological terms, men and women are “cooperative breeders”, so the idea that one gender is better than the other at a basic mechanism to protect the baby is incongruous.”

“Both fathers and mothers can reliably and equally recognise their own baby from their cries,” it says. “The only crucial factor affecting this ability is the amount of time spent by the parent with their own baby.”