Home » Study: Most Doctors Fail to Recognize Underweight Children and the Potential Complications 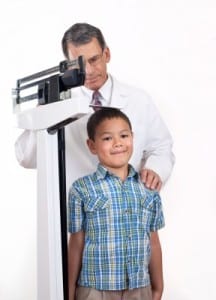 Though obesity is a very common issue, there is another weight problem among children that is less discussed, and according to a recent study, less diagnosed among health care professionals – being underweight. Unfortunately, this can mean serious health complications – everything from malnutrition to heart complications and death – for the children affected. The University College London team that conducted the interview is now saying that improved training is necessary to improve health outcome for underweight children and children with eating disorders.

According to the study, which included an interview of pediatricians at 177 hospitals in England and Wales, doctors have a very poor knowledge when it comes to dealing with underweight children and the serious complications that may accompany the weight issue; this was true despite the fact that many of these physicians had previous experience in dealing with children who had an eating disorder.

All of the physicians questioned were asked how they would identify if a child was underweight and what examinations they would conduct to check for any severe or life-threatening complications. Out of all the doctors queried, only half said they would use the Body Mass Index to decide if older children were underweight. Only one in five said they would adjust it for the appropriate cut-offs in children.

But the failure to diagnose underweight children is only a part of the problem. There are also severe complications that can arise in these children, and doctors were found to have very poor knowledge in how to detect and treat these complications. Especially concerning was the fact that only 13% of the physicians knew a specific danger sign to look for in tests that check heart function. And according to the study, doctors scored poorly in their knowledge of dangerous complications that are associated with giving nutrition to someone who hasn’t eaten for a while or is severely malnourished.

“From previous research, we know that a third of children who are underweight present with life-threatening features,” Dr. Lee Hudson from the Institute of Child Health, University College of London and lead author on the study told BBC.

But Hudson says he’s not trying to point fingers or place blame with the physicians. If anything, he says that the shift in childhood illnesses may be one of the reasons that doctors are failing to spot the symptoms of underweight children or the complications that these children may be suffering from. For example, vaccination programs have begun to work so well that there are now more under-13s with eating disorders than meningitis. What’s more, Dr. Hudson says that symptoms in children with eating disorders are so hit-and-miss that they can be difficult to diagnose.

Yet despite all of this, Hudson says that, because the doctors surveyed are often the first pediatricians to assess these children, particularly out of hours, there needs to be an improvement on how frequently doctors spot dangerously underweight children and teens. They also need to be able to better recognize the signs and symptoms of severe complications.

Professor Russell Viner, a co-author on the study and member of the Royal College of Pediatrics Nutrition Committee, told BBC that the college is now aware of the issue and the need for more training surrounding underweight children and children with eating disorders.

“We are refreshing training on adolescent health,” Viner said. “And in association with the Department of Health and the Royal College of Psychiatry we are developing a training program around mental health in adolescents.”