Home » Study: New Moms Take Up To 15 Months To Regain Their ‘Pre-Baby’ Bodies

We see it all the time: celebrities pregnant and then on the red carpet, back to their pre-baby weight in a matter of just weeks. Victoria Beckham was back to her size zero within just six weeks of delivery, and Heidi Klum was back on the catwalk, showing off her pre-baby figure in six short weeks as well.

But is this creating unrealistic expectations and undue pressure for new moms that don’t have access to nannies and personal trainers? Are we setting the bar too high for ourselves and for each other based on something that just isn’t feasible for the majority population? 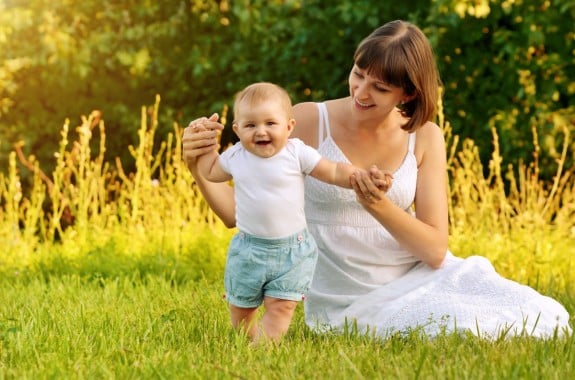 A recent poll of 1,500 women who’d given birth within the last five years suggests so.

“There are unrealistic expectations on new mums to lose baby weight, but most mothers have a different set of priorities after having a baby,” a spokeswoman for Wauwaa.com, the site that conducted the study, told Daily Mail UK.

Nearly half of all mothers questioned said they were conscious of their weight gain, and feared of putting on too many pounds during pregnancy. About a third still ended up gaining more weight than they wanted. Then when baby came, many felt a great deal of pressure when it came to dropping that weight; 40% said that slim celebrity moms made the feel more pressured to drop the pre-baby weight, 16% said their mother-in-law added pressure, and 18% said their own mothers tried to push them to drop the baby pounds.

But many of the mothers discovered that, once they delivered, their life was completely upheaved. Some 64 percent said that the first few months after having a baby included no routine at all, and they struggled just to make through each day. During this time, around 69 percent of moms said they felt like nothing more than a feeding machine, and 63 percent admitted to “letting themselves go” by failing to take care of their hair, make-up, or clothes. In fact, 35% of mothers reported spending less on make-up during this time.

“The new arrival undoubtedly takes over your life and for many women, their appearance is the last thing on their mind,” the spokeswoman said. “The priority is the health and happiness of your baby. Sleepless nights, constant feeds, and shock to the system that having a baby can bring can really take their toll and getting back into pre-pregnancy weight shouldn’t take precedence.”

So how long did it take to get that pre-baby body back?

According to 54% of mothers, it won’t ever happen – not to the point that you have the same body after pregnancy as you did before. And one-third of mothers that admitted their bodies had never fully recovered from the shock of having their first child. But about a third of moms said it took them about 17 months for them to get their life and their bodies back. Losing weight off their tummies and hips as quickly as possible was the main goal for most of them during that time, and those that focused on their weight loss employed methods such as breastfeeding, healthy eating, and exercising.

And, of course, not all celebrities get that pre-baby body back right away. Beyonce and Jessica Simpson are just a couple of the celeb mothers who admitted to having difficulties in getting their weight back down after pregnancy.

“You hear some new mums say the weight just dropped off and others who never fully regain their pre-baby figure,” the spokeswoman said. “Every woman is different and some will find it much easier to lose weight than others [but] it is only natural that new mothers want to look and feel great.”