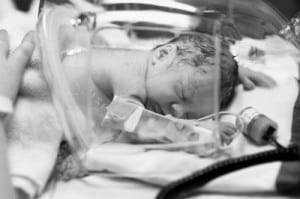 Scientists in the US found genetic differences that seem to play a part in premature labor and birth. Variants in the mothers and infants were found that the researchers feel impact the immune system responses. Uncontrolled responses could cause women to go into labor The total causes of premature birth are not fully understood yet, however infections and medical issues are to blame in some cases.

This study looked at 700 DNA variants in 190 genes of women, comparing those who had full term births and those who had premature infants. The cord blood of the infants were also tested and compared. What they found was that a small handful of variations in genes were common among mothers who had premature infants. The premature infants also carried a gene, Interleukin 6, that was not common in the full term births. Interleukin 6 is produced when cells are exposed to infection and inflammation, leading researchers to speculate that immune system responses may be related to premature birth rates.

Dr Roberto Romero, who led the study, said, “When there is an infection in the uterus, the onset of premature labour appears to have survival value – it would allow the mother to rid herself of infected tissue and preserve her ability to have future pregnancies.”

Premature labor may be a response to unfavorable conditions and illness. Some mothers may not even be aware that they are ill prior to going into premature labor. This study could help doctors create a reliable test for identifying which mothers are at higher risk for premature birth. – Summer, Staff Writer