Just days after new Canadian guidelines were announced recommending toddlers and preschoolers be more active,  a new study, conducted by the Seattle Children’s Research Institute, has found that almost half of American pre-schoolers are not getting enough parentally supervised outdoor playtime. 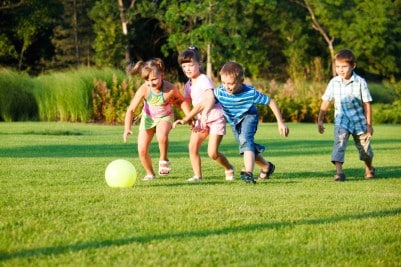 For the study, which was published in the Archives of Pediatrics & Adolescent Medicine, researchers analyzed data collected from 9,000 children during a previous study and found that many of the children; especially young girls were not getting any outdoor playtime.

“One of the main points is that even though many of us may assume that young children spend some time outdoors every day, there’s considerable room for improvement in how often parents take their children outside to play,” said study lead author Dr. Pooja Tandon.

“This study highlights something we already know from other studies, which is that girls in particular seem to have fewer opportunities for outdoor play than boys. We have to try to support girls in the same way we encourage boys to be active and to play outdoors,” added Dr. Tandon.

The team says that the American Academy of Pediatrics has recommended doctors encourage kids get more physical activity especially outdoors as it helps develop their motor skills, increases mental acuity and promotes vision.

The research team looked at statistics on the outdoor-activity routines of 8,950 children born in 2001 who were tracked through enrollment in kindergarten. The data was deemed to be nationally representative, reflecting the behavior of an estimated 4 million kids.

Moms were also asked about their child’s physical activity routine at age 9 months, 2 years, 4 years and then again after starting kindergarten.

51 percent of children were found to be involved in some kind of parent supervised outdoor activity while the rest were not getting the daily outdoor dose as needed. The percentage rose slightly to 58 percent among children who were not enrolled in some form of child care.

The authors also found that boys were more likely to spend time outdoors as were those kids whose parents were involved in an exercise routine.

The gender difference was also prominently felt when it came to the parents who were taking their kids out to play. 44 percent of mothers supervised their children during outdoor activities while only 24 percent of dads did so.

The results were not affected by mother’s marital status, perceived neighborhood safety or family income. TV watching time of kids also did not affect the study.

“I want to encourage parents to talk to all their child’s caregivers, and to ask about their outdoor playtime experience in the same way they would normally ask about how much their child ate that day and what they learned,” Tandon said.

“Unfortunately, I’m not too surprised with these findings, because of what we already know about the obesity epidemic in this country and all the sedentary activities our children are partaking in with the use of video games, TV, the iPad and all of that,” she said.

“Parents need to change their thinking about outdoor play as a luxury that they can get in for their kids on a Saturday, to something along the lines of a necessity,” Briggs said. “We need to know that it has an important impact on our children’s physical health and also on their behavioral development and concerns.”

Given the recent recommendations from Canadian Society for Exercise Physiology, and ParticipACTION, the research only adds to the point that kids need to go out more for better overall healthy development and to avoid the rising risk of obesity later in life.