Home » Study: Screening for ‘Baby in a Bubble’ Can Save Lives 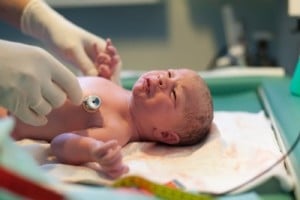 British researchers have asked doctors to screen all newborns for a syndrome that is known as ‘Baby in a Bubble’.  Babies born with this condition have a very weak immune system and cannot even fight simple infections. The researchers hope that screening can help detect the condition earlier and take precautionary measures to save the infant’s life.

In medical terms the condition is called severe combined immunodeficiency (SCID) and is known as baby in a bubble condition because many times the SCID infant has to be kept in isolation and intensive care away from exposure for a long time. The only way to treat is, it bone marrow transplant which is more successful if done earlier when the baby is infection free.

Researchers at the Great Ormond Street Hospital and Newcastle General Hospital compared the survival rates of children who were found to have the condition after their first fell ill and their siblings who were tested right at birth for the condition.

The researchers feel that because 1 baby in every 25,000 could have the condition, screening at birth the baby a better chance to be transplanted. Often, the condition remains hidden until the baby is seriously infected and then the chance of survival is very low.


The researchers also have estimated that testing every child in the UK will cost up to £3.5m. This will still be cost effective compared to the cost of around £500,000 in treatment spent on one patient by NHS, not to mention the emotional trauma to the family.

Professor Bobby Gaspar, consultant in pediatric immunology at Great Ormond Street and lead author said: “SCID is a devastating condition and unless treated, children will usually die in the first year of life.

“This study clearly shows how important it is to diagnose SCID early before children have had a chance to pick up an infection. The research shows that there would be a clear clinical benefit for a screening programme. We are working towards this in the UK and need to ensure that a quick and reliable test becomes available.”

The doctors are showing the results of their research to the National Screening Committee who might decide on including the test in the national testing program. The doctors feel that it can be easily included along with the routine ‘heel prick’ test already done on newborns. – Atula, Staff Writer