If you’re like most busy moms, you consider the shopping cart your very best friend while at the store. It gives you a place to put your goods AND your child. They’re especially helpful when your tot is getting sleepy or too rambunctious to handle. But there are some dangers that researchers say parents should be aware of – dangers that are probably more concerning than most parents realize. 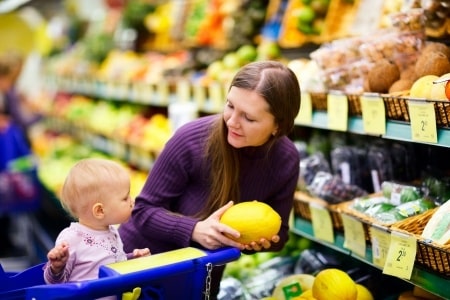 According to a new study from Nationwide Children’s Hospital in Columbus, OH, more than 24,000 children a year end up in the emergency room because of a shopping cart injury. That breaks down to 66 children in a day, or one child every 22 minutes!

Published in the journal Clinical Pediatrics, the study even found that, although there have been some voluntary safety standards put in place since 2004, the situation hasn’t improved. If anything, it’s gotten worse, with concussions tied to shopping carts increasing almost 90 percent from 1999 to 2011.

It only takes a second for an injury to happen, Dr. Smith said. One second of a parent looking away, grabbing something off a shelf, comparing prices, reading ingredients…it’s not that we’re just inattentive. Kids just move quickly. A wiggly infant in a car seat and it tipping over to eject the baby or the car seat and baby. A toddler reaching for their favorite food item and tipping out. Even with the safety belts…some kids are super smart and can unbuckle or wiggle right out of the buckle.

To make matters worse for little kids, the center of gravity is high…meaning that their heads are heavier than the rest of their bodies, so they tend to fall head-first. Dr. Smith says that, if you add that to not having enough arm strength to even try and break a fall and the height a cart seat is sitting up off the ground, you’ve got a mixture for serious disaster.

“This is a setup for major injury,” Dr. Gary Smith, director of Nationwide’s Center for Injury Research and Policy. “The major group we are concerned about are children under 5.”

Part of the problem, Dr. Smith says, is that the U.S. lacks stability standards for shopping carts. These standards, which make it harder to tip a cart, have been adopted in many other countries.

As a parent of five children, I know just how impossible it sounds to NOT use a cart for your child. I would suggest that, if you are going to use a cart, always, always, ALWAYS use the included buckle and keep it tight enough that the odds of your child squirming out of it are as small as possible.

We do a lot of handholding, even when they are in the cart, because it helps keep track of their movements. And I try to include them as much as possible in my shopping experience so they are less squirmy. I ask them to read labels with me or hold items for me. I’ll give them their favorite item in the cart to hold. Also, if we were heading in for a short trip and were using the car seat to carry our infants, we would use the shopping basket for the car seat and then we put our items in the seat are of the cart.