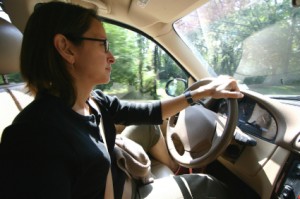 It is the first few weeks after the baby is born and it seems your time and attention is constantly divided between the baby and the number of chores piling up. It is this post-partum phase of fatigue and sleeplessness that may lead to new mom drivers driving in a haze just like drunk drivers, says a recent study.

In a research conducted at Queensland University of Technology by Dr.Kelly Armstrong on 24 new mums aged between 22 and 39, it was found that sleep deprivation experienced by them in the weeks after their baby’s birth drove them to distraction behind the wheels.

This was due to a combination of lot many things. Lifestyle changes, interrupted sleep, high level of unpredictability, disturbed routine all leading to fatigue and alarmingly resulting in most moms saying they have had ‘recent misses’ on the road.

“Mothers had reported living in a mental haze and moving through the day like you’re on autopilot. Clearly this raises concerns for driving tasks, which for an experienced driver is largely an automatic process.” Said Dr. Armstong.

What she also found out was that contrary to the 6 week fatigue period reported previously, mothers actually felt drained even after 12 weeks of baby birth. It was also noted that the mothers’ awareness of their body fatigue and need for rest had decreased.

Overworked moms were like drunk drivers on road according to Dr. Armstrong. A mom awake for 17 hours was like a person with a blood alcohol level of 0.05 per cent while driving and this became 0.1 per cent, or two times the legal driving limit if they did not sleep for 24 hours.

“When you have such precious cargo on board, mothers represent an at-risk group which requires an intervention specifically targeting their needs,” he added.

The research is to be used to develop a mom-focused information booklet to raise awareness on post-partum fatigue. – Atula, Staff Writer
Related Articles: