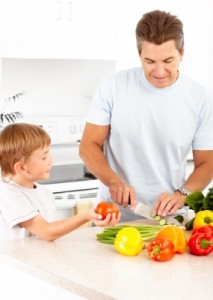 According to a Japanese study out of Osaka University of Commerce, working mothers may suffer a blow to their self-esteem from fathers taking over roles that were once dominantly theirs.

Researchers Takayuki Sasaki worked with colleagues at the University of Texas at Austin to study families where both parents were working. The researchers looked at two types of self-esteem, self-liking and self-competence. Couples were also questioned on each others strengths and weaknesses, including their parenting skills.

For the majority of the couples the mothers did three times as much childcare as the fathers, despite both parents being active wage earners. What was interesting though, was that the more time the fathers spent alone with their children, the lower the mothers rated their own self-competence. This was true of fathers that were rated as competent parents by their spouses, making the fathers’ competence in parenting seem to be a threat to the mothers’. On the alternative, the mothers who rated their spouses as less than competent parents felt no change in their own self-competence when the fathers spent time alone with the children.

Sasaki feels that it is pressure from social norms that causes this self-esteem drop in mothers.

“In American society, women are expected to take a main role in parenting despite increasingly egalitarian sex roles,” Sasaki said. “Thus, we believe that employed mothers suffer from self-competence losses when their husbands are involved and skillful because those mothers may consider that it is a failure to fulfill cultural expectations.”

Researchers found that this lowering did not work the other way. The fathers had no lowering in their self-competence when the mothers were heavily involved in the childcare. They believe this is because the cultural expectation is that mothers will be better parents than fathers will be.

However, this research does not suggest mothers should refrain from working. Researchers also found that the amount of hours a mother works can increase her self-competence rating. Mothers also reported increased marital happiness from involved fathers. – Summer, staff writer