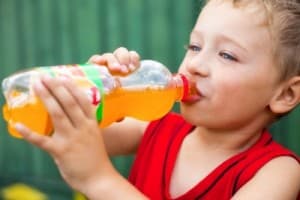 In many families, soda has become the new water. But even in households that it’s not drank as often, it does have a presence – eating out, as a treat, at a friend’s house. Is all that soda making our children more aggressive? One new study seems to suggest as much.

For their study, researchers from Columbia University’s Mailman School of Public Health in New York used an existing study of mothers and their 2,929 children from 20 large U.S. cities. Recruited between 1998 and 2000, the mothers were periodically interviewed and asked to complete a checklist regarding their children’s behaviors over a two month period. Questions asked were designed to measure issues of withdrawal, attention and aggression.

“It’s things like how often does a child destroy his or her own belongings, and how often do they destroy the belongings of others,” Shakira Suglia of the university told Reuter’s Health.

Mothers were also asked about the amount of soda their children drank per day, and what their habits were regarding things like television viewing.

To score the children, researchers measured aggressive behavior on a scale between 0 and 100, with higher numbers indicating more aggression. The scores were then averaged for each group.

According to Suglia, an average score for this age group is 50, and a score of 65 is usually used as a clinical marker to suggest that a child should be evaluated for a behavior or aggression problem. And though none of the averages went above this mark, those that drank four or more servings per day came pretty close.

Looking at it from another angle, Suglia said that children who drank four or more servings per day were twice as likely to destroy other people’s belongings, get into fights and physically attack other people when compared to children who didn’t drink any soda. All of the soda drinkers also scored higher on the signs of withdrawal and attention problem scales.

“Furthermore, if they’re drinking this much soda, it’s probably taking away from other nutritional things the child could be eating,” she said in the publication, The Journal of Pediatrics.

However, Suglia also added that the results may not be the same for each child. While one child may drink four servings per day and display more aggressive behavior, another may not. Additionally, the study is not one of cause and effect, since it can’t be fully proven that the soda actually caused the negative behaviors.

“It’s a little hard to interpret,” she said. “It’s not quite clinically significant.”

Furthermore, the study included mostly single African American or Latino mothers. Though this factor was accounted for, there’s no sure way to determine just how much race affected the study’s results.

Yet, despite its limitations, Janet Fischel, director of developmental and behavioral pediatrics in the department of pediatrics at Stony Brook University School of Medicine in New York, who was not involved in the study, says that this study is a big step in the right direction.