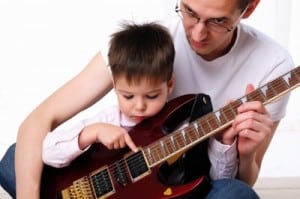 How music affects the brain has been a hot research topic over the last decade, but most of the studies have looked at only extensive musical instruction. Of course, not all children are inclined to study music; so many parents are left to question if that year of piano lessons actually did any good. A new study – the very first to look at short term musical instruction – suggests that any music training is better than no music training, as far as the brain is concerned.

“Our research captures a much larger section of population with implications for educational policy makers and the development of auditory training programs that can generate long-lasting positive outcomes,” said Nina Kraus lead author on the study and Hugh Knowles Professor of Neurobiology of the Physiology and Communication Sciences at Northerwestern. “We help address a question on every parent’s mind: ‘Will my child benefit if she plays music for a short while but then quits training?’”

Brain signals are a true representation of sound. This means that the team was able to fully see how the person’s nervous system captured the sound. The brain signals also helped the researchers determine how key elements of sound were weakened or strengthened by various degrees of ability and experience.

Overall, researchers found that those with musical training during childhood were able to pull out the sound’s fundamental frequency more effectively than those who had received no training. This ability is vital for speech and music perception, and for recognizing sounds in complex or noisy environments.

Previous studies, which have looked at those with extensive musical instruction, as well as individuals who are bilingual, have linked enhanced brainstem function to heightened auditory perception, executive function, and auditory communication skills.

“From this earlier research, we infer that a few years of music lessons also confer advantages in how one perceives and attends to sounds in everyday communication situations, such as noisy restaurants or rides on the ‘L,’” said Kraus. “Thus music training as children makes better listeners later in life. Based on what we already know about the ways that music helps shape the brain, the study suggests that short-term music lessons may enhance lifelong listening and learning.”

But Kraus and her team are interested in more than just learning how music affects the brain. They want to try and discover a way to use music to help children from impoverished communities. She and her colleagues have conducted former studies in which brain changes after intensive auditory experiences, like computerized training, were noted. If researchers are able to better understand how changes in the brain were made, and how they can be maintained long-term, rehabilitative programs can be developed.

“We hope to use this new finding, in combination with past discoveries, to understand the type of education and remediation strategies, such as music classes and auditory-based training that might be most effective in combatting the negative impact of poverty,” Kraus said.